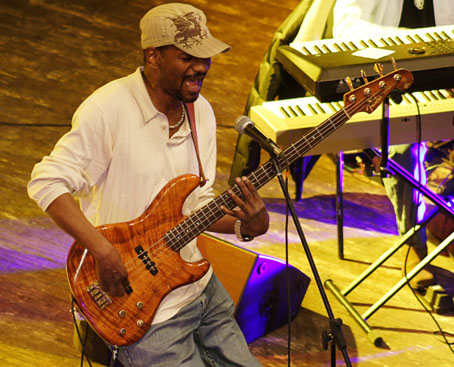 Though Philadelphia native Victor Bailey is one of the greatest jazz bassists ever, its not easy to sum up his music. Firmly established in the long lineage of extraordinary Philly bassists such as Tyrone Browne, Alphonso Johnson, Stanley Clarke, and Jaco Pastorius, one might call Bailey's music jazz fusion or post-funk-jazz, but while his sound may be hard to categorize, its easy to say that he was born to play.

Bailey's father Morris was a well-known composer and producer whose songs were recorded by Patti LaBelle, The Stylistics, Nina Simone, and Harold Melvin. As a saxophonist the elder Bailey played with McCoy Tyner, Jimmy Smith, Lee Morgan and Reggie Workman. His uncle Donald Bailey is a legendary jazz drummer, known for his work with the groundbreaking jazz organist Jimmy Smith.

Born in 1960, Bailey could play any instrument since childhood. One day when I was seven I was at my dad's office on South Broad Street, he says. Dad was asleep on the couch and I went to the piano and started playing. He rolled over and when he saw it was me he asked me how I knew how to play. I said I didn't know I just did.

Later he moved on to drums, then to bass. I instantly understood the instrument, Bailey remembers. My father, who never came downstairs to listen to any of my bands, came charging down the stairs yelling Who's playing bass, who's playing bass? I knew my days as a drummer were over.

Still a teenager, he was accepted into the Berklee School of Music in Boston. There he met current band member and drummer Poogie Bell, who was in South African trumpeter Hugh Masakela's band. Hugh was looking for a new bass player and Poogie recommended me, Bailey recalls. Hugh hired me on the spot. A week later I was on the road and never looked back.

In 1982 Bailey joined the jazz supergroup Weather Report, and, along with drummer Omar Hakim, formed one of jazz fusions ultimate rhythm sections. Since then, he has played on over a thousand different records, by artists as varied as Sonny Rollins, Michael Brecker, Larry Coryell, LL Cool J, Mary J Blige, and Madonna.

In 1989, he released his first record, Bottom's Up, an instant bass classic. It was the first time I was ever recorded playing the way I really play, says Bailey. Fender released the Victor Bailey Jazz Bass in 2001, and fittingly, The New York Times called him a bassist with gold-plated credentials.

Tickets can be reserved online at MauchChunkOperaHouse.com or by calling 570-325-0249.