SOURCE: TWO FOR THE SHOW MEDIA
September 11, 2008
Sign in to view read count 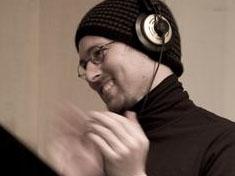 slideshow
Pianist/Composer George Colligan will be performing with his Trio at Smalls in NYC on September 24th, 2008.

“One of the best kept secrets in jazz..." --Chris Hoven, All About Jazz

If you've listened to Cassandra Wilson, Don Byron, Buster Williams, the Mingus Big Band, or Christian McBride, you have heard a keyboardist who is as distinctive as he is adaptable. It doesn't matter if he's accompanying a leader, or taking a spirited solo; pianist/composer/educator George Colligan swings, and has been swinging for two decades, in an almost infinite variety of moods of grooves with over one hundred credits as a sideman, and eighteen CD's as a leader.

Born on December 29, 1969, Colligan soaked up mainstream and fusion influences. He grew up playing drums, switched to piano in his teens, and studied at the Peabody Institute majoring in classical trumpet and music education, and also matriculated at the Banff Summer Jazz Workshop in Canada. After working in metropolitan Baltimore-D.C. area for a few years, Colligan moved to New York in the nineties, and became the sideman of choice for an impressive array of musicians - from Cassandra Wilson, Phil Woods, and Ravi Coltrane, to Melissa Walker, George Coleman, and Vanessa Rubin. His many critically acclaimed CD's as a leader include Unresolved (Fresh Sound, 1999), Twins (Steeplechase, 2000), Return to Copenhagen - Solo Piano (Steeplechase, 2002), Mad Science (Sunny Sky, 2003), and Blood Pressure, (Ultimatum, 2006). In 2002 he won the Jazzconnect.com Jazz Competition. The following year he received a grant from the Chamber Music America/Doris Duke Foundation for his commissioned work, Post 9-11; a suite of jazz pieces based on impressions of life in America after 9/11/01 in 2003. He is also a faculty member at Julliard.

For interview requests or more information contact Two for the Show Media.