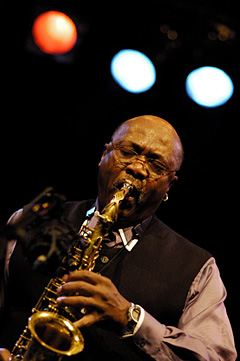 slideshow
This week, StLJN's video spotlight shines on musician, painter, poet, and former St. Louisan Oliver Lake, who's coming to town to perform in a concert sponsored by the Nu-Art Series and St. Louis University next Friday, March 22 at Xavier Hall on the SLU campus.

Lake will joined for the performance by pianist Greg Mills, trumpeter and Nu-Art Series impresario George Sams, and dancers Antonio Douthis-Boyd and Kirven Douthis-Boyd, and, in keeping with the “Jazz 'N Tongues" theme of Nu-Art's current slate of shows, he'll read some of his poetry as well as playing saxophone.

Though born in Arkansas, Lake grew up and spent his formative musical years here in St. Louis, helping co-found the famed Black Artists Group in the late 1960s before moving away to pursue his career. With fellow former BAG members Hamiet Bluiett and Julius Hemphill (plus tenor saxophonist David Murray), he then went on to found the critically acclaimed and influential World Saxophone Quartet, which brought new ideas about arrangements and rhythm sections (or the lack of same) from the avant-garde towards- if not fully into- the mainstream.

In the 1990s, Lake co-founded another significant ensemble, Trio 3, with bassist Reggie Workman and drummer Andrew Cyrille, and they've continued to reunite periodically for new projects to this day. But it is as a solo artist that Lake has been most prolific, releasing more than 40 albums as a leader with various ensembles, many on his own Passin' Thru label.

For many years a resident of Montclair, NJ, Lake also spends a good deal of time these days on his visual art, as described in the first video up above, a feature story about him produced last year for a local PBS affiliate.

After the jump, you can see a couple of videos from 2018 featuring Lake and his big band, recorded during the Vision Festival at Roulette in Brooklyn, NY and at the DC Jazz Festival in Washington.

Next are recently posted clips of Lake with two different trios- the Crash Band Trio, with drummers Bill McClellan and Reggie Nicholson, recorded during the Bang on a Can Marathon in May, 2017 at the Brooklyn Museum; and a set of music from October, 2014 with guitarist Vernon Reid and drummer Marlon Browden, recorded at John Zorn's venue The Stone in NYC.

Those are followed by two samples of Lake reading his poetry, a work called “Do you remember the time?" recorded in 2010 in Pittsburgh, and “Poem for Amiri Baraka" from the 2014 Vision Festival.

Finally, you can see a short video that Lake made last year for Jazz at Lincoln Center's education department, in which he discusses his process for composing and gives some advice to students.