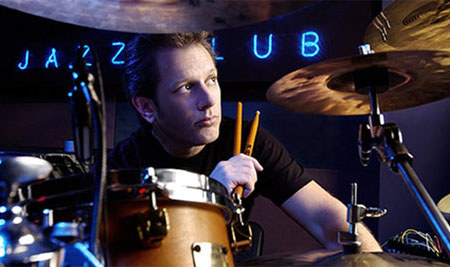 slideshow
This week, StLJN's video spotlight shines on drummer Dave Weckl, who will be back home to perform next Saturday, June 15 as the headlining act at the Chesterfield Wine & Jazz Festival.

A native of St. Charles, Weckl undoubtedly is one of the most successful working jazz musicians from this area, first gaining international attention working in the 1980s with keyboardist Chick Corea, and subsequently parlaying that exposure into a busy career as both a bandleader and a first-call collaborator and session player.

For his St. Louis show, his band will feature a couple of musical friends who also are St. Louis natives, bassist Tom Kennedy and keyboardist Jay Oliver, as well as saxophonist Gary Meek, another longtime musical associate, and guitarist Buzz Feiten, who's had a diverse career stretching back nearly 50 years with the Butterfield Blues Band, the Rascals, the Larson-Feiten Band with keyboardist Neil Larsen, and more.

Though there seems to be no video footage online featuring this particular lineup, there's certainly no shortage of clips featuring Weckl playing with various ensembles, and so for those looking for a idea of what he's been doing lately, here's a collection of a half-dozen recent performances for your listening and viewing enjoyment.

There's a very recent and complete show in the first video embed up above, recorded on April 4 of this year at New Morning in Paris, France and featuring Weckl as the nominal leader of a group with Kennedy, guitarist Mike Stern, and saxophonist Bob Franceschini.

You can see some footage from earlier this year of Weckl and Kennedy jamming at Colos-Saal, a music club in Aschaffenburg, Germany. That's followed by a Weckl solo performance, recorded at the 2019 NAMM show in Los Angeles.