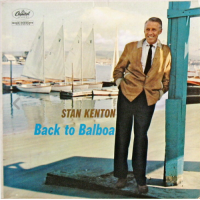 slideshow
Back in the early 1980s, I headed out to Los Angeles to visit a friend in Huntington Beach for a few days. For the summer trip—my first to the L.A. area—I packed my Sony Walkman and a bunch of West Coast jazz cassettes. The tapes weren't to entertain. My motive was more anthropological.

I wanted to listen to the music in its natural habitat while walking on the beaches of Hermosa, Balboa and Santa Monica. In other words, I wanted to feel the music while looking out at the curling waves and expanse of ocean, and feel the same salty air the musicians did. Not that much different from packing opera tapes for a Venice or Milan trip, or accordion music for Paris. Music's flavor is richer, somehow, when heard where it was influenced and recorded. Of course, my friend thought I was nuts. [Photo above of a sunset on Balboa Beach]

The album I listened to on my Walkman in Balboa was Stan Kenton's Back to Balboa. Recorded in January 1958 at Balboa's Rendezvous Ballroom, the album was scored by three magnificent arrangers:

Marty Paich arranged The Big Chase and My Old Flame.

Johnny Richards arranged Rendezvous at Sunset, Speak Low, Out of This World, Begin the Beguine, Get Out of Town, I Concentrate on You, Beyond the Blue Horizon, Two Shades Of Autumn, Love Letters, Desiderata and Artistry In Blues.

As I walked the beach near the pier at Balboa, it was easy to imagine the Kenton band playing there on a balmy summer evening as guys in Hawaiian prints, white T- shirts and chinos and women in patterned sun dresses dug the big, brassy sound in the breeze coming in off the water. Among the standouts during my sandy walk were The Big Chase, Rendezvous at Sunset, Speak Low and Beyond the Blue Horizon. I had been transported back to 1958 through music, and everything about the Richards arrangements made sense. I could see what he saw, smelled what he smelled and felt on my skin what he felt. Yesterday, I needed that summer trip back 60 years given New York's miserable bitter winter rain. A trip worth taking. [Photo above of the Rendezvous Ballroom prior to burning down in 1966]

And here's Beyond the Blue Horizon...