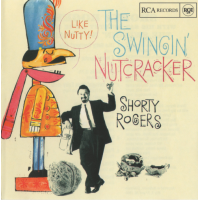 slideshow
What do Shorty Rogers, Larry Clinton, Les Brown, Hal Mooney, Duke Ellington, Herbie Fields, the Nutty Squirrels and Gene Krupa have in common? All recorded a jazz interpretation of Tchaikovsky's Nutcracker. Of the bunch, Rogers's The Swingin' Nutcracker is probably the hippest and most fun to hear. It still jumps like caramel popcorn on a hot skillet.

The album was recorded for RCA in three sessions—one with a sax quintet and two with a big band.

On Snowball, China, Where? and Like Nutty Overture, the big band wraps up the album on May 26, with two changes—Lou Levy (p) replaces Pete Jolly, and Jimmy Giuffre (cl) is added on Snowball. All of the song titles are whimsical plays on the ballet's original Tchaikovsky titles.

All of the arrangements are by Rogers. The most remarkable aspect about the score is how boldly it re-imagines the original. The Swingin' Nutcracker is contemporary from an American perspective without patronizing the European original. It's a purely West Coast Nutcracker with a 1960 TV theme-song sound. Nearly 60 years after its recording, the music still sounds fresh and sassy. I only wish Rogers had given West Side Story the same West Coast makeover.

And here's the entire album...