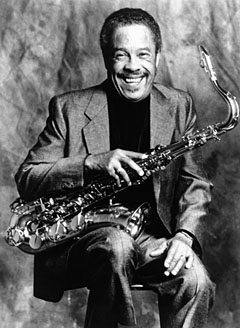 slideshow
Johnny Griffin, a jazz tenor-saxophonist from Chicago whose speed, control, and harmonic acuity made him one of the most talented musicians of his generation, and who abandoned his hopes for an American career when he moved to Europe in 1963, died Friday at his home in Availles-Limouzine, a village in France. He was 80 and had lived in Availles-Limouzine for 24 years.

His death was announced to Agence France-Presse by his wife, who did not give a cause. He played his last concert Monday in Hyres.

His height -- around five feet five--earned him the nickname “The Little Giant"; his speed in bebop improvising marked him as “The Fastest Gun in the West"; a group he led with Eddie Lockjaw Davis was informally called the “tough tenor" band, a designation that was eventually applied to a whole school of hard bop tenor players.

And in general, Mr. Griffin suffered from categorization. In the early 1960s, he became embittered by the acceptance of free jazz; he stayed true to his identity as a bebopper. When he felt the American jazz marketplace had no use for him (at a time he was also having marital and tax troubles) , he left for Holland.

At that point America lost one of its best musicians, even if his style fell out of sync with the times.

“It's not like I'm looking to prove anything any more," he said in a 1993 interview. “At this age, what can I prove? I'm concentrating more on the beauty in the music, the humanity."

Indeed his work in the 1990s, with an American quartet that stayed constant whenever he revisited his home country to perform or record, had a new sound, mellower and sweeter than in his younger days.