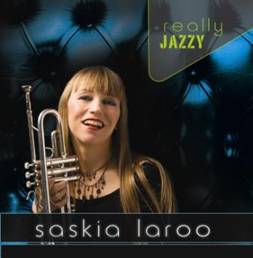 In March, international trumpet player from the Netherlands Saskia Laroo will release her fifth CD on her own label Laroo Records. This new CD, a melange of Funk, Dance, and Jazz using instrumental themes, vocals, rap, beatbox, and improvisation over hip grooves will be called Really Jazzy. Having released two jazz albums and two funk albums in more than twenty countries, Really Jazzy will be her first new release since 1999.

Ms. Laroo recorded and produced her latest work on her own mobile studio shuttling between her Amsterdam home, daily travels, and international tours. Main collaborator from earlier Laroo Records releases Rob Gaasterland from Studio de Boot engineered the final mix of the album and collaborated on its final production.

The CD release presentation for Really Jazzy will be at the Paradiso in Amsterdam, NL on March 15 at 8.30 pm.Some of the highlights of the event will be the launching of the CD by legendary Dutch saxophonist Hans Dulfer ( who also penned the the CD's liner notes), Special guest appearance by flautist Ronald Snijders, a premiere of Laroo's new video clip featuring Armando Cairo conducting the Crea Big Band; Deejays before and after are Adani and Wolf with veejay Wilfred. The venue opens at 7.30 pm, admission is 15 euros including membership. Purchase tickets in advance at various well-known ticket outlets, by phone through Ticketline 0900-3001250, online through ticketmaster.nl, or at the Paradiso when the doors open from 7.30 pm on the night of the event.

Really Jazzy features not only a versatile Saskia Laroo playing trumpet, saxophone, upright bass & vocals, but also an interesting array of international artists: Warren Byrd from the USA who, besides playing piano and keyboards, also sang vocals and co-arranged many of the pieces. Surinamese/Dutch Rapper MC Firestorm aka Iven Naipal and rapper MC Phantom aka Nana Barimah from Ghana perform on several tracks; Also liberally featured on the CD Guyanese rapper and beatboxer Stewlocks aka Andy Ninvalle and beatboxer Eyesful aka Sebastien William, who quadruples as a dijeridoo player and mouth-harpist. Guitarist Jex aka Zoran Jager from Croatia and America drummer Ronald Wright formerly with the George Clinton Band spice the CD with riffs and rhthym throughout. Other guests filling out the personell are Jazz standout Frank Lacey from the USA on trombone and vocals, Johnny Tenor aka Jan Kiewiet de Jonge of the Netherlands on tenor saxophone, Indonesian/Dutch native Ricky Wiranatakusuma on keyboards, Robin Koerts of the Netherlands on bass guitar, and USA natives David Chevan on acoustic bass, Steven Porter on acoustic bass, bass guitar and vocals, and Gene Jackson on drums and vocals.

“Jazzn'Jamz", a groove-driven track culled from Saskia's Really Jazzy, is the first track on a promotional CD released by the Dutch organisation Buma Cultuur representing Dutch Jazz music. Buma Cultuur's compliation CD, used to promote Dutch Jazz music abroad, is being presented at industry conventions such as the Noorderslag (Netherlands), Midem (France) and Popkomm (Germany). “Jazzn'Jamz" features the artisty of some of the aforementioned crew of Really Jazzy.