SOURCE: ALL ABOUT JAZZ
December 12, 2011
Sign in to view read count 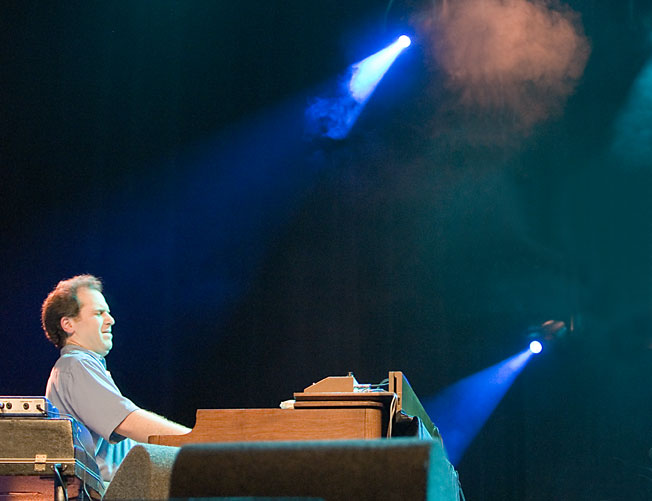 Described by the New York Times as “the best organ trio of the last decade," Larry Goldings, Peter Bernstein, and Bill Stewart have recorded their first live album together. Live at Smalls (Smalls Live) captures the group from the New York City jazz club that helped establish their reputation as one of the greatest organ trios playing today.

Grammy-nominated musician Larry Goldings has recorded 17 albums as a leader and is heard on scores of albums by artists in virtually every musical genre. Those artists include James Taylor (October Road, One Man Band, Covers), Christina Aguilera (Bionic), Madeleine Peyroux (Careless Love, Bare Bones), John Mayer (Continuum), Norah Jones (Not Too Late), Melody Gardot (My One and Only Thrill), Sia (Some People Have Real Problems, Colour the Small One) and Tracy Chapman (Our Bright Future). He has collaborated on a longterm basis with James Taylor, John Scofield, Jim Hall, Michael Brecker, and Maceo Parker.

In 2007, Goldings was nominated for Best Instrumental Jazz Album of the year for his performance on the live album, Trio Beyond—Saudades (ECM) with John Scofield and Jack DeJohnette.

Goldings' music has been recorded by Pat Metheny, Michael Brecker, John Scofield, Sia, Toots Thielemans, Jane Monheit, Gaby Moreno, Jim Hall, Bob Dorough, and Curtis Stigers, among others. In film, Goldings' music can be heard on the soundtracks to “Space Cowboys," “Proof," NBC's “The Office," and the Judd Apatow film, “Funny People." Goldings also is a featured performer in the 2009 Clint Eastwood documentary, “The Dream's on Me," playing original arrangements of several classic Johnny Mercer tunes on piano and Hammond organ. On his latest solo piano release, In My Room, Goldings performs new compositions and explores songs by iconic artists such as Brian Wilson, Joni Mitchell, and the Beatles.

Peter Bernstein “is the most impressive young guitarist I've heard.... He plays the best of them all for swing, logic, feel and taste, and has paid attention to the past as well as the future."— Jim Hall

New York native Peter Bernstein has been an integral part of the world jazz scene since 1989. Sought out by musicians from all generations, he has toured with legendary players such as Jimmy Cobb, Lou Donaldson, Bobby Hutcherson, Lee Konitz, Sonny Rollins, and Dr. Lonnie Smith, and also jazz stars of today such as Eric Alexander, Brad Mehldau, Diana Krall, Nicholas Payton, and Joshua Redman. His recognizable guitar voice graces over a hundred recordings. Bernstein also has taught at the Julliard School, Berklee College of Music, North Texas State University, the New School Jazz Program, and the Jazz Conservatory in Amsterdam.

Hailing from Des Moines, Iowa, drummer Bill Stewart made his name as the rhythmic force behind guitarist John Scofield's band, collaborating with him for five years between 1990 and 1995. He is perhaps one of the most in-demand jazz drummers in the world. Stewart's playing is distinguished by its melodic focus, and its polyrhythmic, or layered, character. Although his drumming bears the influence of various drummers who preceded him, including Max Roach, Roy Haynes, and Jack DeJohnette, Stewart's voice is clearly his own, and already is influencing a younger generation of drummers.

Stewart has toured extensively with Michael Brecker, Kevin Hays, Lee Konitz, Pat Metheny, Joshua Redman, and Maceo Parker. His longstanding association with John Scofield has led to some of the highest quality records and live concerts in modern jazz.

An excellent composer in his own right, Stewart has made several records as a leader that predominantly feature his own music, bearing the same thoughtfulness, humor, and impeccable taste that one hears in his playing.