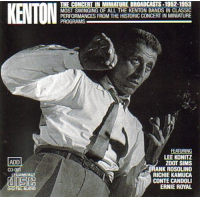 slideshow
In early 1952, money was tight for Stan Kenton. The musical experiments of his massive 39-piece Innovations in Modern Music Orchestra in 1950 had taken a toll on his wallet. What's more, the music didn't go over well with audiences, who found the classically influenced arrangements largely a bore. Kenton reconfigured his band in early 1952 and commissioned arrangements by Shorty Rogers, Gerry Mulligan, Bill Holman and others. But he needed to get the word out.

The NBC radio network pitched in. According to Michael Sparke in Stan Kenton: This Is an Orchestra, Bob Wogan, an NBC executive, proposed a regular 30-minute radio broadcast from cities where Kenton was touring. Kenton picked the songs, and the gimmick was that the orchestra wouldn't know in advance which songs Kenton would call.

The series became known as Concerts in Miniature and aired for roughly 18 months—from April 1952 to November 1953. Through these broadcasts, Kenton received much needed visibility while today we get to hear what this fabulous band sounded like in the raw on the road. Here, thanks to reader John Cooper, is a series of Concerts in Miniature broadcasts:

Here's the band in 1952 at New Jersey's Rustic Cabin (and includes Prologue: This Is an Orchestra! and Invention for Guitar and Trumpet)...