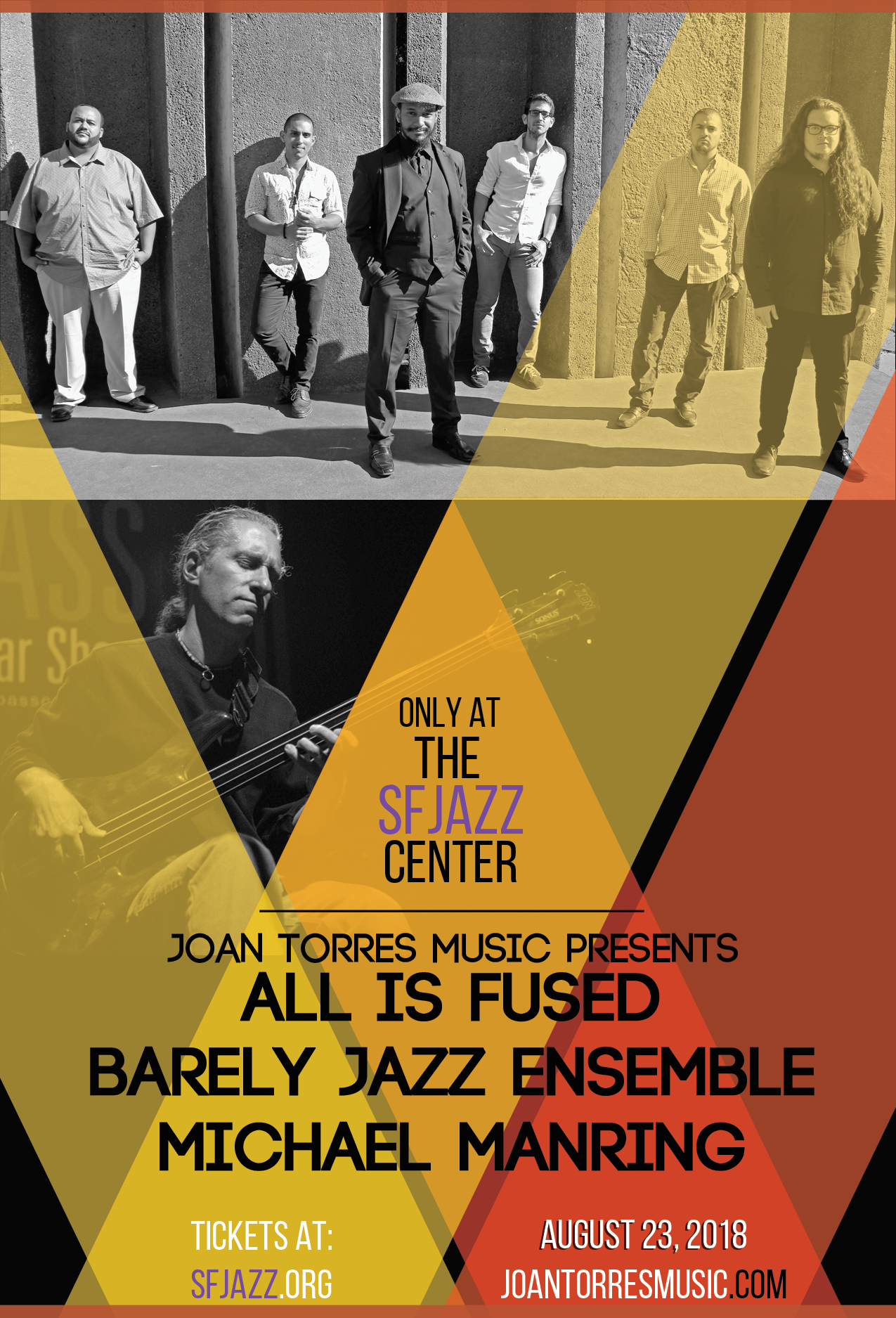 slideshow
Inspired by redefining music genres and pushing boundaries, Joan Torres Music presents a one-of-a-kind live performance at the SFJAZZ Center on August 23rd 2018 showcasing the great Michael Manring, The Barely Jazz Ensemble, and the cross-continental Joan Torres’s All Is Fused. The night starts with Manring opening the show, and grows progressively more collaborative as musicians from around the Bay Area synthesize new sounds on stage together for the first time. A final set from Joan Torres’s All Is Fused will take listeners on an emotive musical journey of discovery with their genre bending Jazz.

Comprised of three sets the evening explores inspiration, collaboration, and creation of new and never before heard sounds

The amazing Michael Manring, an American bassist whose influence in the evolution of the bass as a solo performer is unquestionable, will open up the night. As the soloist for the evening, Manring shows us what it means to explore music when you’re on your own. Manring is a musician Torres himself has looked up to from his early years and became an inspiration in Torres meticulously honing his craft.

Representing the gathering of friends to share new ways of doing known music, the Barely Jazz Ensemble is a tribute to the joys of early jazz is a modern setting. The ensemble features musicians from the Bay Area who gathered as friends, using contemporary popular music as an opportunity to share, explore, play around, and ultimately improvise which is one of the key traits Jazz became known for.

Taking matters into his own hands, bassist and composer Joan Torres takes original compositions to the stage with Joan Torres’s All Is Fused. The ensemble, originally from Puerto Rico, come together from New York, New Orleans, Boston, and San Juan to bring a musical narrative to life. Spinning tales of depth, loss, reflection, and the impulse for change, the music pushes the boundaries of progressive jazz to bring the audience a truly unique interpretation of our times.

Bassist, composer, and producer Joan Torres has lead the Jazz Fusion ensemble All Is Fused since 2011. With three albums released to date, multiple award nominations, and the Vox Pop award for the Fusion Album category of the 14th Annual Independent Music Awards, the ensemble has been described as going “far beyond complex musical ideas managing to weave in a true sonic narrative" in their music (Music News 2016). Throughout several releases they have appealed to genre and non-genre fans alike.