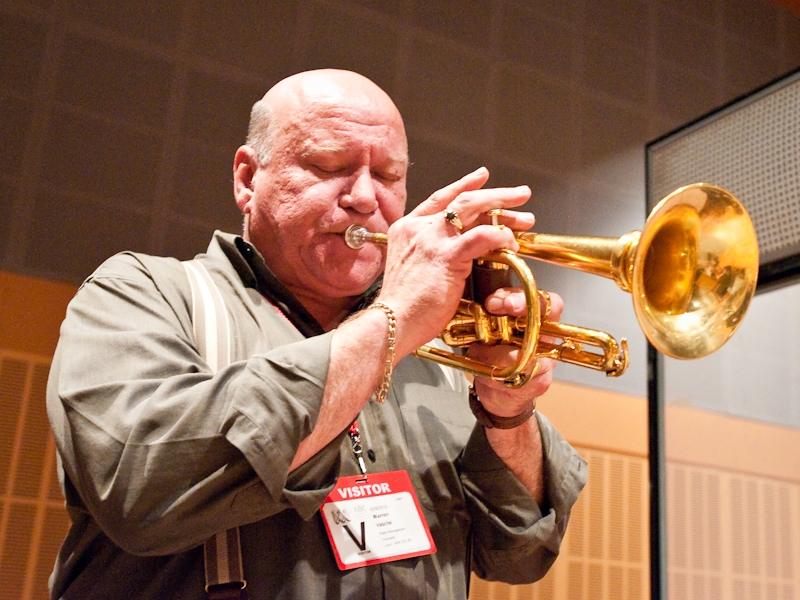 Brecon Jazz 2014 is the 30th anniversary year of the world-famous festival, and in tribute, the organizer Orchard has announced the first few names for August 8-10, with appearances by trumpeter Warren Vaché and renowned local band Mike Harries and the Root Doctors who both played at the first ever Brecon Jazz in 1984, a reunited Loose Tubes who took to the Brecon stage a year later, plus one of the major music successes of 2013, Laura Mvula

It is fitting to see Jazz trumpeter Warren Vaché on the 2014 bill, as he was there from the start, playing the very first Brecon Jazz in 1984 as a swing musician in his early 30s. He will be back in Brecon this summer with award-winning British Jazz Saxophonist Alan Barnes.

The new generation Loose Tubes reunite for their own 30th anniversary this year after a hiatus of some 24 years. Under multi-instrumentalist and composer Django Bates, the 21-strong big band features a whole generation of British Jazz talent, having played the Brecon festival in 1985. They will feature familiar names such as Django Bates, Iain Ballamy, Julian Arguelles, Martin France, Chris Batchelor, Eddie Parker and Ashley Slater for their appearance in Brecon.

One of the real finds of 2013, soul singer/songwriter and Mercury Prize nominee Laura Mvula won Best Female Act and Best R&B or Soul Artist at the 2013 MOBO Awards, achieved a Top 10 debut album for Sing To The Moon, and was highly acclaimed for her haunting vocal performances, including the Pyramid Stage at last year’s Glastonbury.

Mike Harries is now in his 80s, but his Cardiff-based good time band the Root Doctors will once again return to excite a Brecon audience.

Orchard director Pablo Janczur said: “We had a great year in 2013, with 20% growth in ticket sales and we hope to keep building that momentum through the 30th anniversary year of this great international festival. The programme is coming together nicely, with artists covering the broad spectrum of Jazz and appealing to a range of audiences. We’re announcing some of our names early and aim to have tickets on sale through breconjazz.com by the end of February. We want to make this a special year for Brecon Jazz and the people of the town who provide us with such great support.”

Orchard recently won the Regional Promoter of the Year Award in the UK Live Music Business Awards against competition from across the UK.

Last summer Jools Holland’s Rhythm and Blues Orchestra brought the festival to a rousing close in the iconic Market Hall after acclaimed performances by the likes of Phronesis, Zoe Rahman and The Impossible Gentlemen. Django Bates thanked his Saturday night audience at Theatr Brycheiniog for “putting on a real Jazz festival – they are so rare these days”, MOBO Award winner Zoe Rahman told a live TV audience how much she loved coming back to play Brecon, and a number of artists tweeted how much they enjoyed the experience.

Brecon Jazz came from an original idea in the autumn of 1983 by the Brycheiniog Association for the Arts, and the following summer “New Orleans beneath the Beacons” was born, since when it has hosted some of the luminaries of global music such as Sonny Rollins, Wynton Marsalis, Stephane Grappelli, Cleo Laine and Amy Winehouse. In the past 30 years over a million people from across the world have flocked to the town, bringing millions of pounds into the mid Wales economy and introducing the area to a whole new audience.

The full Brecon Jazz 2014 programme will be announced on February 26 and tickets available from February 28.