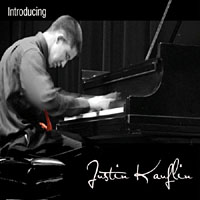 slideshow
All About Jazz members are invited to enter the “Justin Kauflin—Introducing Justin Kauflin“ giveaway contest starting today. We'll select FIVE winners at the conclusion of the contest on November 29th.

(Following Justin Kauflin at AAJ automatically enters you in the contest.)

At the piano, Justin Kauflin has an improvisational zeal matched by a technique that is equal parts lyrical and emotional. His sound can be best described as dynamic and vibrant, with a genuine sense of feeling and appreciation for the soulful essence in jazz music. Although classically trained, Justin prefers the improvisational opportunity jazz provides, which is readily apparent in his mastery of the piano. This is further influenced by his steadfast, day-to-day trust in God, drawing from all forms of music. With this inspiration, he brings a true and pure musical experience to all who hear him play.

The middle of five children, Justin Kauflin's story is a unique one. He overcame numerous obstacles, most notably losing total vision by age 11. Total blindness meant total adjusting, not only for Justin, but family and friends as well. Making others feel comfortable around HIS blindness continues to be a challenge.

From the onset of plinking tunes at age 2, he studied classical violin and piano for 9 years, switched to jazz piano after losing his vision, and began performing professionally by age 15 with the Jae Sinnett Trio and as pianist for numerous restaurants and church functions. In high school, he performed in Miyazaki, Japan, the Vail Jazz Workshop, Betty Carter's Jazz Ahead in DC and selected as outstanding soloist at Jazz Festivals in Chantilly, VA and N. Texas. He graduated alongside his sighted peers in the top 1% of both Salem High's and Governor's School of Performing Arts' class of 2004.

He currently resides in Manhattan, NYC with his lovable Seeing Eye dog, 'Candy.'

On this CD, Justin is accompanied by a young and inventive band of '20-somethings': Billy Williams (drums), Phil Kuehn (bass), Tim Green (sax) and Etan Haziza (guitar). He handpicked musical selections ranging from traditional hymns and modern jazz classics to a few original compositions, including his arrangement of the Beatles' tune, 'A Day in the Life.' With help from the excellent musicianship brought to the studio by his band mates, he brings fresh interpretations of some wonderful music.

Aside from music, Justin's passions include his faith, reading, technology, and Chick-fil-A