His vocal dexterity and word-work is hand-glove with the material throughout. You can't help but really like this Cat… Texting and Driving is a marvelous panorama of Tull's and his pals' talents.. —Nick Mondello, All About Jazz 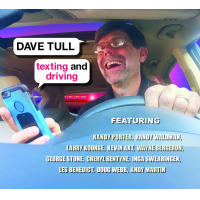 slideshow
Dave Tull is a witty observer of the trials and tribulations of everyday life … especially the life of a professional musician. Tull is a veteran drummer who, among his many credits, performed in Chuck Mangione’s band for 10 years and accompanied Barbra Streisand on three of her most recent tours.

Although Tull has been playing for over 30 years and has appeared on dozens of recordings as a sideman, he released his first CD as a leader, I Just Want To Get Paid, only in 2009. That was a full-length vocal project that showcased Tull’s smooth vocal stylings and clever compositions. Now, his newest CD, Texting And Driving, will cement his reputation as a top-notch lyricist and humorist in the vein of Dave Frishberg and a singer with a sly, tongue-in-cheek sensibility and improvisatory style that sounds like he might be the unacknowledged son of Jack Sheldon and Eddie Jefferson.

Because Tull started his musical life as a drummer, his development as a singer started with scatting along with his drums, and he learned to improvise vocally before learning any actual melodies. It’s an approach that shaped his vocal style and sets him apart from other singers.

For anyone who’s familiar with Tull’s career, his singing chops comes as no surprise. He began singing on gigs in the 1990s when he worked in Page Cavanaugh’s trio. Cavanaugh, the veteran pianist and singer who became one of Southern California's most enduring lounge jazz artists, liked Tull’s singing so much, he often wrote vocal parts for him and gave him solo time at the microphone. After leaving Cavanaugh, Tull became both the drummer and lead vocalist in Chuck Mangione’s band. His vocal on Mangione’s “The Children of Sanchez” and his bebop scat vocal on “Dizzymiles” was featured at hundreds of concerts, including The Playboy Jazz Festival at the Hollywood Bowl and The Blue Note in New York City. Tull has also played on eight of Cheryl Bentyne’s solo projects, and he accompanied her on six tours to Japan. Bentyne had Tull sing on two tracks of her CD Moonlight Serenade, including the song Tull Tales.

On Texting And Driving, Tull displays his wide command of subject matter and musical styles. Tull says, “I don’t sit down to write a funny tune. If a song turns out to be humorous, it’s because it’s just a big part of who I am. I love to laugh. Besides, there’s so much more to write about than romantic love. I savor the absurdities of life.”

Songs like “The Texting Song,” a big band swing number in which he sings about the dangers of texting and driving, or “Watch Your Kid,” a waltz in which he laments the lack of parental supervision when kids run amok in public, are laugh-out-loud funny. As a busy, touring musician, Tull is someone who travels a lot and meets more people than he could possibly remember. “Please Tell Me Your Name” is a funny send-up of running into a fellow musician at the airport, but he just can’t remember the guy’s name, an embarrassing position most people have faced. On “Clapping on One and Three” he wonders if he can continue a relationship with a beautiful woman after discovering that she doesn’t know anything about jazz.

Although he excels at wry observations, he also has a more serious, ruminative side. “I Will Sing to You” is a gentle lullaby he wrote for his children, Henry and Frannie, while “You Remind Me,” a samba, is a love song for his wife, Dawn. “The Stoplight at the End of the Street” is perhaps Tull’s most philosophical piece as he imagines the point of view of a stoplight close to his home that observes the daily flow of humanity.

Tull is joined by a roster of A-list musicians, most whom are old friends and musical compatriots that he’s toured with in various bands over the years. The band includes guitarist Larry Koonse, whom he’s been friends with since high school, and trumpeter George Stone, whom he’s known since college. Randy Porter is a Portland-based pianist whom Tull to flew in to L.A. to anchor the trio. Tull and Porter worked together on several tours with The Rebecca Kilgore-Dave Tull Quartet. Tull worked with trumpeter Wayne Bergeron in Maynard Ferguson’s band in 1987 and with trombonist Les Benedict in Steve Huffsteter’s band. Tull and pianist Randy Waldman both appeared on Michael Buble’s first two albums and worked together on Barbara Streisand’s tours. Tull and bassist Kevin Axt toured for ten years with Chuck Mangione, and saxophonist Doug Webb met Dave on the Bill Holman Big Band.

He’s also joined by two outstanding vocalists on a couple of songs. Inga Swearingen, a popular singer-songwirter from California’s Central Coast, sings a duet with Tull on “The Moment,” a lush, romantic ballad with a string arrangement by Stone. Vocalist Cheryl Bentyne joins him on “The Date,” a flirty song wherein Tull and Bentyne have very different impressions about the same encounter, revealing their thoughts as internal monologues as they sing over one another.

For those who know Tull only as a superb session drummer, Texting And Driving is an engaging project that showcases the range of his other talents as a singer, composer, and arranger. Although he’s frequently witty and sometimes sardonic, there’s also a sweetness to his writing and singing that gives this CD an endearing and affable quality that is inviting and enchanting.