Are You a 'Jazz Nerd'? Jason Marsalis Revisits and Clarifies the Term 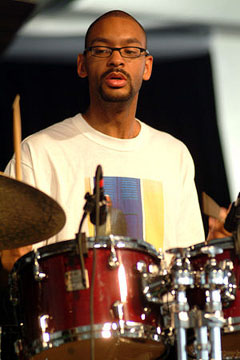 slideshow
In the wake of causing a minor firestorm in the online jazz community last month with a playful video decrying the influence of “jazz nerds," drummer Jason Marsalis emailed me a clarification this morning that both expands on the definition, shares his inspiration for the video and offers further talking points that amount to a calling for a truce in the so-called Jazz Wars.

As a few commenters on the post argued, the crux of Marsalis' issue with so-called jazz nerds isn't necessarily the use of complicated structure, multi-genre influences or odd meter (citing his own work with adventurous young saxophonist John Ellis as an example, a point also made by by Pop and Hiss commenter nash61ce). In one part of a four-page statement, Marsalis argues that his point was a question of adding those elements without a working knowledge of jazz's rich history and instead opting for complexity for complexity's sake in composition.

“[A jazz nerd, or JNA for short] will hear groups led by Dave Holland and Wayne Shorter and will marvel at the complex musical structure but ignore the historical substance behind their music. JNA saxophonists will listen to and worship the music of Mark Turner, Chris Potter, Michael Brecker, and other modern players but ignore the musicians that have influenced their music such as John Coltrane, Dexter Gordon, Warne Marsh, and Sonny Rollins.

JNA will hear the music of James Brown and say that it's no big deal because it only has two chords. JNA looks down on blues as 'simple' while wanting to play endless non- melodic eighth and sixteenth notes over 'All the Things You Are' in 7/4 straight feel. By the way, a slow blues is boring. Better yet, swing is actually uninteresting and straight feel is actually more 'challenging' and 'exciting.' Instead of embracing both, the JNA worships one while ridiculing the other. Speaking of that, 4/4 is 'old' while 9/8, on the other hand, is 'new.' A basic drum groove is boring unless you fill it with lots of notes. To the JNA, that's modern music. So to recapitulate, JNA reduces music to as many complex notes as possible while ignoring the simple elements and history behind the notes. This kind of music will have audience members sitting on their hands suffering boredom."

Interestingly, Marsalis goes on to argue against what he believes is another troubling trend in modern jazz, “innovation propaganda." Couched in part as a defense of the “young lions" counter-revolution of the 1980s that celebrated jazz of the 1950s and '60s (a movement vigorously championed by his family), Marsalis writes, “Starting from 2000 up to now, the majority of today's music started to reference rock, hip- hop, pop, R&B, and world music. That's great except there's a catch. Almost NO music before 1990 is referenced in the majority of music played today."

More, including the full text of Marsalis' statement after the jump.

While the idea that the “majority" of contemporary jazz disregards Coltrane, Miles Davis, Thelonious Monk and the entirety of the jazz firmament sounds like a stretch, Marsalis' overall tone with regard to the modern versus “neoclassicist" “jazz wars" is one that advocates for inclusion from both sides.