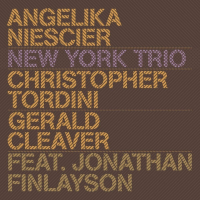 After alto saxophonist Angelika Niescier's masterful live disc from 2018, Berlin Concert (Intakt), she decided to head into the studio to document her continually evolving compositions. It's a somewhat altered line-up from the earlier album. Niescier's go-to bassist, Christopher Tordini remains. However, instead of Tyshawn Sorey we have Gerald Cleaver occupying the drum kit; and we are also treated on a few of the cuts to trumpeter Jonathan Finlayson, who adds another dimension to Niescier's pieces. With more of an emphasis on Niescier's experiments in compositional approach than the Berlin Concert, which was chiefly a high-intensity display of improvisational prowess, this release requires a bit more patience to process. But the music remains just as potent and memorable.

The two pieces that are carry-overs from the Berlin Concert are outstanding vehicles for Niescier's sinewy, nimble acrobatics. "The Surge" benefits enormously from the addition of Finlayson, whose presence on the head with Niescier and in his own disciplined, carefully tempered solo statement offers effective contrast to Niescier's more demonstrative technique. It's a hard-charging, propulsive piece of music that is the perfect start to the album, and it includes a powerhouse solo from Cleaver as well. "5.8" offers another solo from Cleaver, this time to start the track before Niescier's tricky theme is presented, after which the track transitions into a vigorous odd-meter groove that unleashes another jaw-dropping solo from Niescier, perfect in combining manic energy with a searching, lyrical quality.

The other six pieces are new to this release, and with the exception of ..."ish," a bop-like tune with a conventional swinging rhythm and "Push/Pull," a funky, bouncing track with Niescier and Finlayson at their most rhythmically dynamic, the remainder of the album ventures into abstract territory, where Niescier's more heterodox compositional strategies come to the fore. "Ekim" has a stately, somber aspect and a haunting melody, but it relies on unusual bass tunings that ultimately lend it a somewhat unsettling presentation; and "Chancery Touting" and "Cold Epiphany" place more of an emphasis on texture and sonority than melody, allowing the players to sketch their ideas much more obliquely than on the album's more straightforward pieces. Finally, the album's closer, "A Truck Passing a Clock Tower" draws from John Cage for inspiration, using silence and tension to sustain its quiet energy in a piece utilizing free improvisation within carefully designed parameters.

If there's a criticism to be made of this challenging, stimulating record, it might be the relatively minimal presence of Finlayson, who ends up playing on only three of the tracks. Hearing him in greater quantity, especially on the more abstract pieces, could have helped to develop Niescier's more experimental vision even more powerfully, as his appearances on the album consistently hint at a compelling synergy with Niescier. But even so, in displaying a glimpse of a restlessly ambitious compositional mind at work, New York Trio is certainly worth engaging, and it points to Niescier's continuing importance as one of today's most distinctive and creative alto saxophonists.