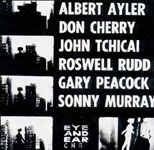 Even in a form of music as decidedly left-of-center as "free jazz," a canon of musicians and works has been built. This canon is essentially based upon easily-obtainable recordings rather than a history that falls to documents, primary sources and musical meetings that went commercially unrecorded. A case in point: American creative large ensembles of the 1960s generally start and stop with Ornette Coleman's Free Jazz (Atlantic, 1960) and Coltrane's Ascension (Impulse, 1965), leaving out many valuable works.

When we're lucky, the gathering of six musicians and composers that produced New York Eye and Ear Control in 1964, an ostensible soundtrack for a structural film of the same name by Michael Snow, is mentioned as a halfway point between the orchestras of Coleman and Coltrane. If only such a triumvirate were that simple.

There's a huge amount of between-the-cracks history around New York Eye and Ear Control. Snow is a painter, filmmaker, violinist, pianist and composer, born in Montreal and working in New York in the mid-1960s. His loft served as a rehearsal and gathering space for musicians associated with the Jazz Composers' Guild, among others. His graphic design, centering on the "Walking Woman" image based on Carla Bley's silhouette, graced the covers of both the original ESP-Disk issue of New York Eye and Ear Control and Paul Bley's Barrage (ESP, 1964).

This particular Snow film juxtaposes idyllic imagery with the gestural and abstract, as well as raw, natural humanity with wooden cut-outs of human form, or collective improvisation with formalist visual order. And yet what the music world believes it has is a missing link negating the artistic context in which the album was produced.

The group is comprised of Albert Ayler's working quartet with trumpeter Don Cherry, bassist Gary Peacock and drummer Sunny Murray, plus New York Art Quartet hornmen, altoist John Tchicai and trombonist Roswell Rudd. Whereas Free Jazz is a clear double quartet with a sketchy theme and loose, stereo-divided dialogue and Ascension separates concise extemporizations with collective ensemble passages, the sextet here is a free jam that creates its own order. Certain approaches to sound rise in volume and become foregrounded, while Murray and Peacock create an allover field of motion, generating pulse that swings in its production of presence and absence.

Ayler's wide-vibrato wail, gutbucket honks and folksy abstractions are all here, but they're constantly goading and commented on by Tchicai's slinky repetition, Rudd's braying tailgate and Cherry's darting bebop shards. The weight of the Cherry-Ayler front line is well documented, but Ayler's ability to defer in an ensemble, his worrying of phrases goosing Tchicai's laconic harp, or mimicking a brassy Dixieland blat, aren't often experienced let alone spoken of. It doesn't matter whether this is a "cornerstone" Ayler recording, for New York Eye and Ear Control is a valuable window into the music's early history as well as what might have happened outside record dates, more than one is usually privy to.