By DAN BILAWSKY
February 26, 2018
Sign in to view read count 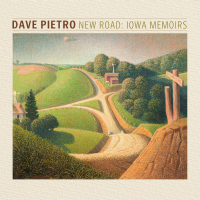 In essence, New Road: Iowa Memoirs is the story of an urbanite's awakening to the rural lure. But to state this album's meaning in such reductive terms is to minimize its power and undercut the very beauty that inspired its creation in the first place.

Back in 2011 and 2012, The University of Iowa tapped multi-reedist Dave Pietro to serve as an artist-in-residence for several weeks at that institution and surrounding schools. While Pietro, a mainstay on the New York scene for the past three decades, had essentially seen it all by that point, the Iowa countryside's beauty and majesty managed to offer something refreshing in its Midwestern appeal. Those visits were the impetus behind this music, encouraging Pietro to paint his midland experiences in sound.

The album's opening track—"Sunrise On The Muscatine Highway"—has a mystically winsome draw in its introduction. Pietro, pianist Gary Versace, and percussionist Rogerio Boccato capture aurora's many-hued arrival there before heading out to the highway. Inspired by an early morning eastward drive and a Mark Twain quote extolling the virtues of the colorful daybreak over Muscatine, this composition perfectly transfers the visual into the visceral realm. "Sleep Prairie, Sleep" follows, serving as something of a companion piece. It similarly draws life from time spent on Iowa's roads and speaks again to mystery and awe, but its a more understated affair. The core quintet at work shows great restraint and range in representing the slumbering prairies in shadowy winter while Pietro, trumpeter Alex Sipiagin (on flugelhorn), and Versace each demonstrate their sonic singularity.

As the album moves on, its scope in style and substance expands. "It's A Half Decent Muffin" has an artfully edgy free-bop posture and an interesting origin story, as Pietro recorded part of a conversation about morning pastries, transcribed the rhythms of that talk, and used them as germs for the song's melody; "The Sanctuary," inspired by an Iowa pub of the same name, is a balladic gem that speaks to all of our individual refuges and gives well-earned space to bassist Johannes Weidenmueller and the leader; and "Heartland" moves from pianistic quietude to pure joy, capturing the warm feelings surrounding the friendships made and experiences had through these sojourns in the Hawkeye State.

The two-part "TRavel Guide," inspired by a performance of Ravel's String Quartet in F that Pietro witnessed during the first of his Iowa residencies, then brings the album to its end. Both parts use the DNA of the second movement of that Ravel composition as its basis, but each speaks in different accents: "TRavel Guide -Part 1," fronted by Pietro's flute, has a more relaxed flow, while its kin presents with buoyant zest.

In the sights, sounds, spaces, and sunrises of Iowa, Dave Pietro has discovered and embraced what he's long encountered (and helped create) in composer Maria Schneider's musical renderings of her Windom, Minnesota homeland: the indescribable wonders of the American countryside. While Pietro's renown largely surrounds his work in the most groundbreaking large ensembles of the day, New Road: Iowa Memoirs serves as a reminder that his small group efforts deserve a much wider audience and closer look.