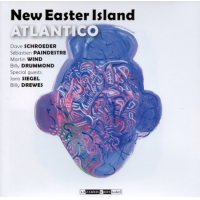 Atlantico is co-lead by French jazz pianist Sebastien Paindestre and U.S. reed and woodwind player Dave Schroeder. They made their recorded debut with En Rouge (La Fabrica'son, 2016). On this sequel—the second in a planned triptych—they are again joined by acoustic bassist Martin Wind and drummer Billy Drummond, along with two guests.

Schroeder's "The House That John Built" starts things off with a challenging nod to John Coltrane's "Giant Steps," with the help of guest soprano saxophonist Billy Drewes. Schroeder's bass flute engages in a lively dialog with the sax, and the whole performance has a lightness and joy that transcends the harmonic difficulties.

The title tune features guest vocalist Janis Siegel (of the vocal group The Manhattan Transfer) contributing hypnotic vocalise, in conversation with Schroeder's Mongolian ever buree ('horn-trumpet,' a member of the clarinet family with the same timbre as a basset clarinet, which extends the bass range of the standard clarinet), as well as a lyrical double bass solo from Wind.

Paindestre's "Le soupirail" has an especially catchy melody and rhythm, and is a showcase for Schroeder's soprano saxophone playing. "Merg With Virg" introduces Schroeder's chromatic harmonica—which inevitably recalls the great Toots Thielemans—while also including a fine piano solo. The harmonica winds up being the centerpiece of the album, featuring in the following two tracks ("Le jour du vin et de la pivoine" and "Pont Neuf") as well.

This band has a great rhythm section, as well as two excellent composers. But in many ways their sound is defined by Dave Schroeder's remarkable facility on numerous, seemingly unrelated woodwinds. On this album he plays several horns, only partially overlapping with the ones on the debut.