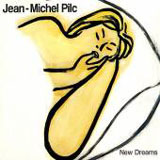 Like a master builder, pianist Jean-Michel Pilc constructs and reconstructs, but instead of fixed or stable edifices his creations are more like castles in the air. All the better. There's nothing stiff or rigid about what he makes through his playing and composing so there's room for listeners to breathe as they explore these new spaces with him.

If all this sounds a bit strange, just listen to New Dreams. Move along with him note to note, moment to moment. Trust. If you have the ears for it, you will find this time well spent. It's pure delight to follow Pilc without knowing where you are going—and it's impossible to know where he is going, until he gets there. So every song on this recording is an exploration, a discovery.

There are standards (including "But Not For Me, "A Child Is Born, "Satin Doll and "Straight No Chaser ), ten of the fifteen tracks are Pilc originals ("Trees Part I, "Hummingbirds, "New Dreams, "Action and "Trees Part II, among them) and there's also a rearrangement of Robert Schumann's "Widmung. Every one is exquisitely, delicately rendered and, in some ways, it doesn't matter what is a standard and which is a Pilc original—they all sound completely fresh. At times, it's like hearing an extraordinary magical music box which just refuses to play the prescribed tunes again and again, the same way, as would be expected. Pilc seems to tinker with one's perceptions. An original heard for the first time can sound extremely familiar, a standard unknowable. And even when hearing this music on repeated listening, everything still sounds unexpected.

If you are talking (or thinking or analyzing how these great effects are achieved or why Pilc chooses to do things as he does) you can't be hearing. And if you're not hearing fully, you're not experiencing this music. So stop reading and, in this age of multitasking, go against the grain and do only one thing: Listen.

But Not For Me; A Child Is Born; Trees Part I; Hummingbirds; New Dreams; Satin Doll; Widmung; Old Joe; Action; The Meadow; Burning Path; The Brook; Simplicity; Straight No Chaser; Trees Park 2.