By Dan McClenaghan
September 25, 2003
Sign in to view read count 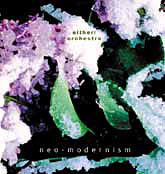 It's puzzle why the ten man Either/Orchestra, under the leadership of saxophonist Russ Gershon, is still something of an underground outfit. They've been through fifteen years and eight albums, the spawning of careers of several first rate jazz men, including John Medeski and Charlie Kohlhase, and scores of great live performances.

Neo-Modernism continues in this vein – brightly truculent (in the very best sense of the word) with dark underpinnings, intricate textures, vibrant soling, and a palpable sense of the joy of musical creation pervading the proceedings.

The Either/Orchestra consists of three brass, three reeds, piano/bass/drums and a percussionist. The sound is full and rich, in your face a great deal, with a lot of churning going on beneath the surface, thanks to Gershon's arranging skills.

Gershon's E/O sound has been compared to trombonist/arranger Melba Liston's work with Randy Weston's large units and Sam Rivers' big ensemble recordings. On Neo-Modernism you'll hear the influence of Mingus, a la Mingus Mingus Mingus on "The Modernist," with its dense texture and Rick McLaughlin's muscular, aggressive bass lines. The spirit of Coltrane's African Brass session seems to be hanging around "Los Olvidados," with its all-encompassing harmonies and dark rhythms.

There's also a nod to Thelonius Monk and soprano sax man Steve Lacy (who has made it his mission to interpret Monk's music), on "Baby Invents Monk." Add to these a hard-driving, edgy take on "Fast Edd," written by former E/O bassist Bob Nieske, that features Gershon's Steve Lacy-esque soprano sax work.

The set closes with "Heavily Amplified Hairpiece," a title that could have been penned by Mingus, but the song opens with a knock and rumbling Bitches Brew groove, with drummer Harvey Wirht and percussionist Vincente Lebron cooking along on a hot simmer, an organic opening to a song that adds the wasp sting (a new thing for E/O) of electronics to the mix.

Progressive as always, spirited, and with too many creative solos to mention.