By JOHN KELMAN
September 28, 2008
Sign in to view read count 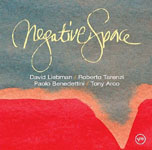 Sometimes there's simply too much good material for a single disc, and then a decision has to be made: release a double-disc set, or two single-discs, spread apart and each with its own complexion? In the case of saxophonist Dave Liebman's European group with Italians Roberto Tarenzi (piano), Paolo Bendettini (bass) and Tony Arco (drums), choosing the latter not only helps bring more attention over a lenghtier period of time but, despite being culled from the same three dates in late 2005, also focuses on slightly different aspects of the group.

Dream of Nite (Verve, 2007) was largely about original compositions from the group members (with one cover), also weighing in heavily on Liebman's soprano playing. Negative Space is a more equitable mix of Liebman's soprano and tenor, also placing greater emphasis on his writing, with the saxophonist contributing three of its five tunes and a contemporary re-harmonization of the Bernier/Simon classic, "Poinciana." The set-closer, a barnstorming group take of Mongo Santamaria's "Afro Blue"—originally popularized by John Coltrane— demonstrates how indebted Liebman is to the late saxophone icon, while also making clear how he's evolved that debt into something far more personal.

Unsurprisingly, like Dream of Nite, Negative Space sits comfortably in the mainstream, but proves that the tradition has by no means reached a position of complacency. Liebman's "G.I.G." refers to the late, great songwriting team, George and Ira Gershwin, and swings along at an amiable pace, leaving plenty of space for Tarenzi to build an impressive and lengthy solo of motivic invention before Liebman takes over on tenor, combining his own attention to thematic development with the visceral expressionism that's become an ever-present signature. This is timeless music that would have fit comfortably at the 1978 Village Vanguard date which resulted in Liebman's Mosaic Select 32: Pendulum Live at the Village Vanguard (Mosaic, 2008), and yet in the group's expanded harmonies, notably Tarenzi's accompaniment on Liebman's paradoxically ethereal yet grounded title track, there's an unmistakably modern air to the entire set.

Despite there being more soprano saxophonists on the scene today, few have evolved as instantly recognizable a voice as Liebman. In the company of Tarenzi, Benedittini and Arco—who've clearly spent considerable time working together as a trio—Liebman has the same kind of freedom to explore, within some defined parameters, as he has with American groups including the recently reformed Quest, heard on Redemption—Quest Live in Europe (Hatology, 2007). His exciting duet with Arco, following the drummer's well-constructed building-from- nothing solo at the beginning of Liebman's burning "Get Me Back to the Apple," is a perfect confluence of bebop sensibility and stream-of-consciousness free play.

Negative Space is a strong dovetail to Dream of Nite, possessing all the strengths that made the quartet's first release so compelling while adding a few new ones to the mix.

Introducing the Band; G.IG.; Negative Space; Get Me Back to the Apple; Poinciana; Afro Blue.