By CHRIS MAY
September 3, 2007
Sign in to view read count 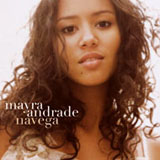 Until now, for most people, the music of the Cape Verde islands has started and finished with the singer Cesaria Evora, who arrived on the international stage, aged 47, with the album La Diva Aux Pieds Nus (Lusafrica, 1988), becoming a festival-headlining world music star with Miss Perfumado (Lusafrica, 1992). Evora's style is called morna, and like its primary source material—which prominently includes Portugese fado and Angolan landu (lament)—excels at expressing sadness, loss and heartbreak. It's a kind of mid-Atlantic blues, deep and cathartic.

With Navega, a poised and totally gorgeous debut album by the 23 year-old singer Mayra Andrade, another Cape Verdean star has arrived—and one whose journey to "overnight success" is likely to be measured in months rather than decades. Like Evora's music, Andrade's is a mixture of far-flung influences, in which traditional Cape Verdean rhythms and song-forms blend with Brazilian samba and bossa nova, jazz and a little French chanson. Unlike Evora's, it's a sunny, infectiously upbeat concoction, full of light and joie de vivre, and it will put a spring in the step of the weariest listener.

Born in Cuba to Cape Verdean parents—economic necessity forces most Cape Verdeans to emigrate (Evora's nickname, The Barefoot Diva, comes from her habit of appearing shoeless onstage, an act of solidarity with her impoverished countrymen)—Andrade was brought up in Senegal, Angola and Germany, and has lived in Paris, where Navega (which means "upon the waves") was recorded, since 2003. She has perfect pitch, a lovely, caressing tone with smoke-cured edges, and is comfortable in both alto and soprano registers. She also has advanced rhythmic facility, effortlessly navigating the sudden shifts in tempo and rhythm which are features of many of the tunes on the album.

Most of the music is acoustic, played by a core trio of Cape Verdean guitarist Kim Alves, Cameroonian bassist Etienne Mbappe and Brazilian percussionist Ze Luis Nascimento, augmented on some tracks by guest musicians on accordion, saxophone, trombone, guitar, cello or percussion. Nimble and unfailingly lyrical, the music wears its rhythmic sophistication lightly. Alves adds a variety of other fretted instruments for color, most frequently the treble-pitched, four string cavaquinho. Mbappe's bass—a sumptuously resonant acoustic instrument on five of the twelve tracks—locks with Nascimento's symphonic range of percussion to settle the grooves and trigger the tempo and rhythm changes.

All but one of the songs were written, and are sung, in Cape Verdean Creole. Four are by the iconic late Cape Verdean "new batuco" composer, Orlando Pantera, and three are Andrade originals. The accompanying booklet includes English and French translations of all the lyrics, and for once the exercise is justified. The songs have real substance, some, like "Dimonkransa" (democracy), dealing with weighty issues, and all are expressed with degrees of nuance and poetry which make them worth reading.

A remarkable debut. If music had the power of extending summertime long into the fall, Navega might do it.