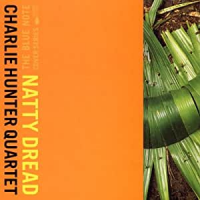 From the surprisingly successful Blue Note Cover Series comes this exceptional disc by multi-talented eight-string guitarist Charlie Hunter. The 29-year old Hunter has made a thankfully unpredictable choice "covering" Bob Marley's influential and popular 1974 reggae classic Natty Dread. Hunter, heard here in a quartet with an alto, tenor sax and drums, resists the urge toward reverential readings and reggae clichés in this music. As a result, the soulful beauty of Marley's outstanding music shines through. Anyone familiar with Hunter's work in the ultra-cool quartet T.J. Kirk can expect another dose of thoughtful, sometimes funky -but always original -takes on somewhat familiar material.

Charlie Hunter, like Bill Frisell and John Abercrombie, can wield any sound he wants to from his guitar (an eight-string is only slightly less weird than Ron Escheté's unimaginably difficult seven-string guitar). Hunter can make his axe wail like an organ, ring like a pedal steel, whine with Hendrix-like feedback or sing like Grant Green on an especially soulful day. Hunter is comfortable in just about any style imaginable too—but he sticks mostly to very accessible playing. What he does with Marley's hit "No Woman, No Cry" is tender, passionate and unbelievably beautiful. It's origins are evident but the liners spell out the influence Bill Frisell and Ry Cooder (nice to see Cooder get his due for a change). Hunter's version has hit potential, and deserves to get widespread airplay. Everyone who heard this song while I played the disc (including my mother, who doesn't like jazz) was just hypnotized by it. Another hit-worthy tune is the marvelous version of the anthem-like "Revolution" which features the reeds. Hunter also kicks out the jams here, crafting a John Patton / John Zorn / Ed Cherry does James Brown groove on "Bend Down Low." And there's something appealing about the '70s Jeff Beck funk of "Lively Up Yourself" and "Talkin' Blues" too. Throughout, Hunter sounds inspired and interested—and the average listener will find as much to appreciate here. A very nice surprise worth checking out.

Another nice surprise is guitarist Fareed Haque's "cover" of Crosby, Stills, Nash and Young's 1970 "classic rock" album Deja Vu. Haque's incredible six-string talents (on classic guitar) and the acid-jazz appeal often overcome what could have been simply a smooth-jazz recollection of some hippy-dippy fun. A Blue Note concept (that must have sounded gimmicky on paper) turns out to yield some good, valuable music for the 1990s.