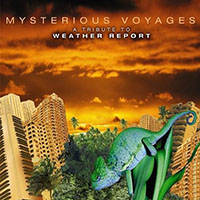 Weather Report's fifteen-year tenure was not only the longest of the fusion groups that emerged from the post-Bitches Brew era—including John McLaughlin's Mahavishnu Orchestra, Chick Corea's Return to Forever, and Herbie Hancock's Headhunters—it was arguably the most broadly influential. Starting out as an electric free jazz collective but ultimately honing a sound that included world beat rhythms and a more orchestral approach defined by the distinctive sounds and compositions of saxophonist Wayne Shorter and keyboardist Joe Zawinul, Weather Report also introduced a number of inestimable talents, most notably the late bassist Jaco Pastorius, who singlehandedly reinvented the role of the electric bass.

Over the years a host of artists have made their debt to Weather Report's innovations clear. Guitarist Scott Henderson and bassist Gary Willis' Tribal Tech, for example, clearly found inspiration in latter-period Weather Report's sonic textures. Others, like bassist Marcus Miller, paid more direct tribute by recording Pastorius' "Teen Town," but reinvented the melody on a slapped and popped fretted bass, instead of simply copying it on a fretless.

Both Miller's version of "Teen Town" and an original tribute by Tribal Tech can be found on Mysterious Voyages, a new anthology that pays homage by interpreting well-known (and some not-so-well-known) Weather Report tunes, as well as new pieces acknowledging a clear debt. The generous two and a half hour-plus double-disc set is filled with a veritable who's who of contemporary jazz, including bassists Christian McBride, Matthew Garrison, and Kai Eckhardt; saxophonists Bill Evans and Bob Malach; pianist/keyboardists Patrice Rushen, Scott Kinsey, and Rachel Z; and drummers Adam Nussbaum, Paco Sery, and Kirk Covington. The material includes Christian Jacob and Terje Gewelt's gentle acoustic piano/bass duet rendition of Zawinul's "A Remark You Made," guitarist Rocco Zifarelli's power trio reading of Pastorius' "Havona," a surprising newgrass-inflected two-guitar cover of Weather Report's biggest hit, "Birdland," and an Americana-tinged reading of Pastorius' classic "Three Views of a Secret."

But as much as the covers are worth the price of admission by themselves, some of the new material is equally compelling. Tribal Tech's otherworldly tone poem "You May Remember Me" suggests how Weather Report might have sounded had it been a guitar-keys-bass-drums quartet. Kai Eckhardt's "Queen of Cups" begins with the kind of bass solo Pastorius might be playing if he were alive today, before evolving into a dark and spacious ballad that is more economical, texturally, than anything involving Zawinul could ever be. Scott Kinsey's "Big Rock" evolves Zawinul's later world rhythm-based work, sounding like something out of Procession or Sportin' Life: reverential, without being strictly imitative.

A broad-based and loving tribute, Mysterious Voyages offers greatest appeal to Weather Report fans who want to hear the music taken to the next step. But homage aside, it also stands alone as a terrific collection of music from some of today's most notable fusion names—and a few others who will undoubtedly be heard from more in the future.