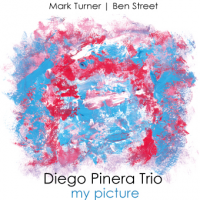 Berlin-based drummer/composer Diego Pinera steps out for an ambitious trio program with saxophonist Mark Turner and bassist Ben Street. Pinera was born in Montevideo, Uruguay, but has lived in Germany since 2003. He studied at the Berklee College of Music (U.S.), the University of Music in Havana (Cuba), and the University of Music and Theater in Leipzig (Germany): he gets around.

Latin jazz is his core interest, but this music is simply creative contemporary jazz, sometimes with a "Latin tinge." Turner has played in this format extensively as part of the Fly trio with bassist Larry Grenadier and drummer Jeff Ballard, and Street has an especially extensive resume—so it is not surprising that they prove to be sympathetic, resourceful playing partners. Pinera is also a member of pianist/composer Sebastian Schunke's Berlin quartet, and appears on Genesis, Mystery And Magic (Nwog Records, 2014).

Pinera composed most of the tunes. His "Open Window" starts the set, a fast opener featuring call and response between saxophone and bass on the head, with busy, chattering drum accents underneath. It establishes the active, conversational sound of the trio. Pinera often writes long lines which the other players follow, weaving in and out: they provide a more distinctive compositional structure than playing on changes. "Cuidado" (Caution) works this way, as do "Today" (the ballad of the set) and the title tune (which has creative brush work from the leader).

"The New One" opens with a lengthy drum solo—Pinera stretching out before introducing another distinctive theme. The covers provide contrast. The arrangement of Thelonious Monk's "Evidence" places a distinctive Latin rhythm under the head. The standard "The Song Is You" (by Jerome Kern and Oscar Hammerstein II) closes the album with a swing feel, although it is no less conversational than the originals.

The album title My Picture is literal: Pinera also painted the cover image. But it's a much fuller picture than that, with his composing, drumming, and band leading also taking center stage. And this triangle is equilateral, with all three members actively contributing.

Open Window; Cuidado; New Hope; Evidence; Today; Bart; My Picture; The New One; The Song Is You.