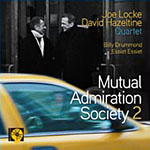 In the last year of the twentieth century, Sharp Nine Records released Mutual Admiration Society, a quartet date co-led by vibraphonist Joe Locke and pianist David Hazeltine, which also included bassist Essiet Essiet and drummer Billy Drummond. A brainchild of Sharp Nine honcho Marc Edelman, the collaboration between these two longtime friends was based on a desire to explore each other's strengths. Hazeltine was keen on interacting with the blues-oriented, earthy side of Locke's playing, as well as experiencing the vibraphonist's harmonically adventurous compositions. Locke welcomed the opportunity to interpret Hazeltine's arrangements and play off of the pianist's swinging, individualistic style. A few of the record's highlights included a deliberately paced, dreamlike version of the 1960s pop hit, "I Say a Little Prayer," Hazeltine's "Can We Talk?," which moved between funk and straightforward swing, and Locke's intriguing reharmonization of the standard "Spring Will Be a Little Late This Year."

Locke and Hazeltine played a six night engagement at New York City's Sweet Basil in support of the record and then went their separate ways. Early this year, Edelman brought the quartet back into the studio and once again the co-leaders contribute the bulk of the material. The ringing chords which underlie the melody of Locke's "Pharoah Joy" resemble a revved up version of the foundation of Pharoah Sanders' "The Creator Has A Master Plan." Dedicated to the late drummer Tony Reedus, Hazeltine's "One For Reedy Ree" entails a throbbing, repetitive introduction followed by an angular melody with a few twists and turns. Based on Cole Porter's "Everything I Love," Locke's "What's Not To Love?" begins with a haunting figure, voiced at the low end of vibes and piano, that reappears in the midst of this bright, optimistic tune. Employing a Latin rhythm and pockets of straight-ahead swing, Hazeltine's "Blues For Buddy" is an up-tempo romp that breathlessly jams a handful of melodies into twenty-four bars.

It's hard to imagine a bassist and drummer better suited to complement Locke and Hazeltine. Essiet and Drummond have so much to contribute, and the bulk of what they play doesn't sound overly assertive or particularly busy. They demonstrate many ways to swing, often subtly tightening or loosening the pressure behind the soloist during the course of a single chorus.

Locke and Hazeltine are expansive, stimulating improvisers who stay in touch with everything going on around them. In the final analysis, however, it's the group's sound that makes the record special. Even on up-tempo tracks like "Convocation" and "Blues For Buddy," there's warmth and a centered vibe to the music. It's a pleasure to hear how they support one another (Hazeltine's comping behind Locke, for example, is marvelous), and always find common ground regardless of the feel or tempo of the material.

Mutual Admiration Society 2 is a significant contribution to the jazz mainstream. Here's hoping another ten years don't have to go by for the next installment.

Visit Joe Locke and David Hazeltine on the web.

Pharoah Joy; The Peacocks; One For Reedy Ree; Twelve; What's Not To Love?; Convocation; If It's Magic; Blues For Buddy.