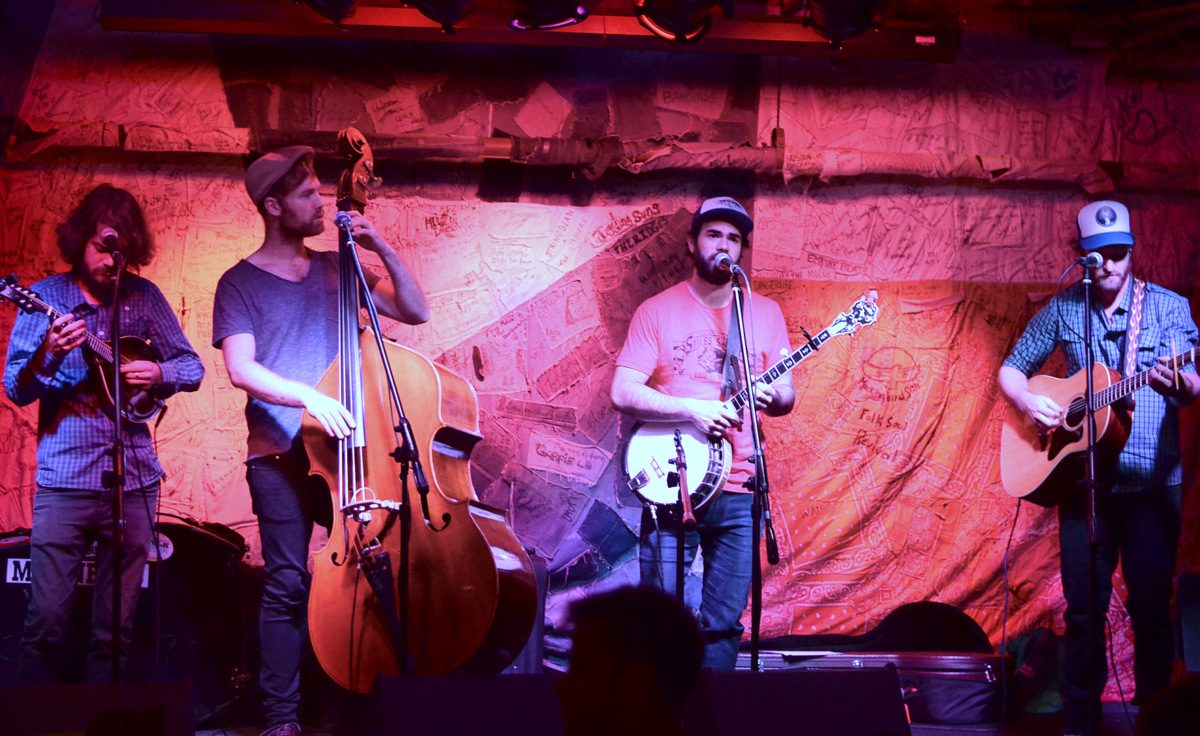 Mustered Courage is a Melbourne, Australia-based quartet that plays a decidedly American-influenced brand of music. Its sound is a countrified modern mix of bluegrass, folk, rockabilly, honky-tonk, pop, western swing, rootsy rock, gospel and blues. In short, Americana. But not just any brand of Americana. Mustered Courage's brand is unique in the fact that its music appeals to the most staunch and conservative traditionalist as well as the most open-minded green and uninitiated neophyte.

The group—consisting of three Aussies (Julian Abrahams on guitar/vocals, Josh Bridges on upright bass/backing vocals and Paddy Montgomery on mandolin/vocals) and an expat Texan (Nick Keeling on vocals and banjo) has been making noise down under for quite some time. Its 2013 CD, Powerlines (Travianna Records) won the band two "Golden Guitar' nominations at the 2014 CMAA Country Music Awards of Australia for Alternative Country Album of the Year and Instrumental of the Year for the track "Allegheny."

In support of Powerlines, the group has come to the states for a 2014 summer tour. The plan is to cover and blanket the U.S. over a 10 week period before the tour culminates at the IBMA World of Bluegrass convention in Raleigh, NC in late September/early October, where they are booked as one of the showcase acts.

On an unseasonably cool late July evening, Mustered Courage was booked at New York City's Hill Country Barbecue at the downstairs stage in the Boot Bar. Hill Country Barbecue might sound like a strange place for a concert. It most assuredly is not. The smoked and grilled meat mecca's stage has a state-of-the-art sound system and has welcomed and seen performances by artists such as Dale Watson, Bob Schneider, and Rosanne Cash. Mustered Courage appeared on stage a few minutes past 8:30 p.m., and promptly launched into its set of bluegrass meets country tales of moonshine, southern hospitality, love, woe and belonging. The first set was highlighted by the band's original music ("Southern Style," "Roam," "Madeline" from its self-titled 2011 CD Baby debut album, and "Stand By Your Side"), inspired covers (Queen's "Fat Bottomed Girls"—which was given a bluegrass/rockabilly treatment—should not have worked, but it did), as well is its sense of humor (regarding Abrahams's use of a pencil as a capo in his guitar, Keeling commented, "We're Mustered Courage. We're all about innovation. Everything is a little more expensive here in New York... couldn't afford a capo, just the big pencil." Not to be outdone as a comedian, later, during the same set, Abrahams quipped, "8% of the way through our 50-day tour of the U.S. and we've already had about 20 arguments!"). Set one ended with a scorching version of "Go To Hell" which featuring an amazing dueling guitar and mandolin back-and-forth interaction.

After a short intermission, the band returned to the stage, opening the second set with the title track from Powerlines followed by "Behind The Bullet" and a cover of Garth Brooks's "In Baton Rouge." Hands down, the highlight of the second set was the brilliant cover of Seal's "Kiss From a Rose." Mustered Courage breathed a new life into the old tune making the song its own. The foot stomping "Still Shinin'" was another song that caused audience members to pause, look up from their meals and take notice.

Mixing honky tonk imagery with bluegrass picking, guitar, banjo and/or mandolin strumming, bass plucking, a touch of Aussie humor, charming four-part harmony and top-flight musicianship, Mustered Courage owned the small stage. It has style, stage presence and tons of talent. With a mix of dark and bright lyrical forays, layered over banjo-dominated upbeat music, Mustered Courage is a band that screams to be noticed. Though Australia is not generally known for bluegrass music. Mustered Courage may quickly change that perception. Mustered Courage at Hill Country Barbecue—it was finger pickin' good! 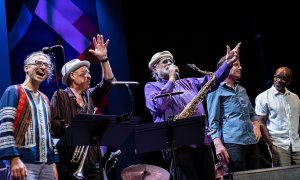