By JAMES NADAL
September 13, 2015
Sign in to view read count 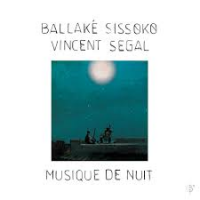 Expanding on the adage that less is more, Malian kora master Ballaké Sissoko and renowned French cellist Vincent Segal have taken an ascetic minimalistic approach on Musique De Nuit. This melding of primordial African intonations with Baroque inclinations, has yielded a stimulating and unique hybrid acoustic format, which they first experimented with in "Chamber Music," back in 2009. As with that production, this latest release is also recorded in Bamako, Mali, only this time half the record was done on Sissoko's rooftop, at his home, for the genuine aural experience of a field recording.

The title came about from the night hours which they chose to record, when most of Bamako is asleep, and the air is cooler and quieter. "Niandou," is the first of four tracks done on the rooftop, al fresco, with the tape picking up surrounding rumbles, dins, and gusts of wind. This scenario only heightened the interplay between Sissoko and Segal, as they went in with a sketched idea from which to expand and improvise from. "Passa Quatro," is a nod to the post-bossa nova sound of the Brazilian viola-caipira, done in engaging hypnotic tempo. "Balazando," and N"kapalema," exude the ambiance which permeates the music of Mali, with Sissoko plucking his kora in tune with his heritage, allowing Segal to exhibit his amazing bowing skills and technique.

On "Diaboro," they head into Studio Bogolan in Bamako with invited vocalist Babani Kone offering the authentic griot depiction of an ancient tale. "Super Etoile," is performed within the framework of the Senegalese guitar style of Jimmy Mbaye, who backed singer Youssou N'Dour on his rise to fame. The pace is brought way down during "Prelude," which displays an obvious classical influence, but then "Samba Tomara" brings forth the underlying Euro-African current that is evident throughout. The record closes with the title track wrapping up the sentiment and mood which has been captured, offered back into the mysterious African night.

Sissoko and Segal certainly accomplished what they set out to do on Musique De Nuit. They are not only accomplished musicians, but also good friends, who, having played together for so long, know each other well enough to project their singular sound in a cohesive unison of virtuosity. The unpredicted result of two diverse instruments from dual continental cultures blended with a sophisticated focus is a mesmerizing experience.