Vince Seneri is one of the most dynamic 'burners' of the Hammond B3 organ on the music scene today. Endorsed by Hammond Suzuki Organ Company USA, he is a new generation B3 player with a class and style all his own. This charismatic performer has been entertaining for over twenty years and consistently delivers a first class performance at all his shows.

His dedication and integrity for the music and aim to please his audience is paramount. As a musician, composer, and arranger, this multi-talented artist is known for his energy and expertise with the B3 - a truce master of the instrument who has captured the hearts of fans worldwide.

Raised in Hackettstown, NJ, Vince Seneri began his musical career at the age of six. His father, Peter Settineri, was an accordionist, who played professionally with his own band, and introduced the instrument to Vince. Later, his father bought a Hammond M-3 organ, and introduced that instrument to him as well. He learned the accordion, then devoted himself to the Hammond organ and piano.

During his teens, it was the great jazz organist Jimmy Smith who musically influenced Vince the most. He also admired and was influenced by a host of other organists including: Jimmy McGriff, Richard Groove Holmes, “The Mighty Burner” Charles Earland, Larry Young, Captain Jack McDuff, Ronnie Foster, Wild Bill Davis, and Don Paterson. His piano influences includ: Oscar Peterson, Wynton Kelly, McCoy Tyner, Chick Corea, and Herbie Hancock. Barry Harris and Dr. James Williams were grat mentors who Vince had the opportunity to study with. Vince Seneri is also a graduate of Rutgers University located in Newark, NJ, where he received his BA degree in business.

Vince Seneri has performed and recorded several CDs, with some of the best musicians in the business today including: Randy Brecker, Dave Valentin, Houston Person, David “Fathead” Newman, Paul Bollenback, and Buddy Williams. His latest release is Street Talk has tributes to music legends Ray Charles (Unchain My Heart) and Jimmy Smith (Steamrollin' written by Vince Seneri). The CD has been well received worldwide. It's even been described as one of the best B3 releases in 2005. Many anticipate hearing much more from Vince, as he continues recording and performing as venues everywhere. Show less 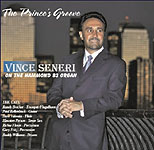 All About Jazz musician pages are maintained by musicians, publicists and trusted members like you. Interested? Tell us why you would like to improve the Vince Seneri musician page.