Martin O. Grosz was born February 28, 1930 in Berlin, Germany. He has been a resident of the USA since the age of three and he began playing banjo and guitar in and around New York while still attending college. His musical inclinations were towards Dixieland jazz

After military service he settled in Chicago and played there for several years in local clubs, making a few records but making little impression on the national jazz scene. In the mid-70s he moved back to New York and joined Soprano Summit, the excellent small band co-led by Bob Wilber and Kenny Davern.

According to the critics, Marty Grosz is today's foremost jazz rhythm guitarist and chord soloist. He is virtually the only major jazz guitarist who doesn't use an amplifier. This makes him either the last remaining proponent of the acoustic guitar tradition in jazz or the lone harbinger of a new non-electric movement.

Marty sings, too. His vocals have become as much in demand at record sessions and jazz concerts as his driving guitar rhythm. They are delivered in styles ranging from barrelhouse abandon to whispered restraint, and are sometimes raucous, often mischievous, but almost always informed with a wry sense of the absurd. Grosz was born in Berlin, Germany in 1930. By the time he reached his third birthday, his toes were tapping to radio songs in New York. His urge for musical expression manifested itself when he began strumming a ukelele at the age of eight. A few years later he heard a record that highlighted guitarist Bernard Addison's shuffle-beat behind Roy Eldridge's trumpet: Out went the uke and in came the guitar.

In 1950, Marty cut his first record with a band that included the young pianist, Dick Wellstood, and the veteran New Orleans bassist, Pops Foster. A visit to Chicago in 1954 turned into a twenty-year residency during which he played with many of that town's jazz stars such as Albert Ammons, Floyd O'Brien, Art Hodes, and Jim Lannigan.

Marty returned to New York in 1975 to join Bob Wilber and Kenny Davern's Soprano Summit. There followed a round of touring and recording with Soprano Summit; Dick Wellstood's Friends of Fats; Yank Lawson and Bob Haggart; and the New York Jazz Repertory Orchestra directed by Dick Hyman, an orchestra with which Grosz played at the White House. In 1986 Grosz became a charter member of The Classic Jazz Quartet, along with Dick Wellstood, Joe Muranyi, and Dick Sudhalter. Besides playing and singing with the group, Marty wrote most of its arrangements. He has appeared at guitar concerts with such players as Joe Pass, Herb Ellis, and Charlie Byrd. He enjoys playing guitar duets and often works in a duet context with a violinist or saxophonist.

As a featured single Marty has made guest appearances on Public Radio's A Prairie Home Companion and Fresh Air with Terry Gross, and on NBC's Today Show. He was spotlighted at Carnegie Hall during the Cool Jazz Festivals and, more recently, at New York City's prestigious 92nd St. Y concerts and at the Vineyard Theater in Manhattan.

When he isn't on the road with his guitar, Marty and his wife like to spend afternoons on their patio in Piermont, New York, vodka in hand, watching the lazy Hudson drifting by. Show less

Marty Grosz and His...

Marty Grosz And The...

Sings Of Love And... 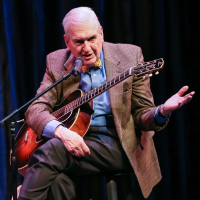 All About Jazz musician pages are maintained by musicians, publicists and trusted members like you. Interested? Tell us why you would like to improve the Marty Grosz musician page.