TIM BALLARD (1948-2009) was a multi-faceted, master entertainer (vocal, saxophone, trumpet) whose career spanned over four decades and delighted audiences on a countless volume of music in many genres, including classic jazz, smooth jazz, soul, R&B (including Motown), rock, and standards. In 2008, Tim was inducted into the Kansas Music Hall of Fame as a member of the former Capitol Records group, Garry Mac and the Mac Truque ("Truqued Up! Alive in Concert" Capitol Records, 1969).

A 15-year veteran of the Las Vegas music scene, and a music entrepreneur for 46 years, Tim's name graced many major hotel and casino billboards as a headliner, such as Bally's, Mandalay Bay, Caesar's Palace, the Bellagio, Flamingo Hilton, the historic Desert Inn, and the MGM Grand. In May 2003, Tim headlined a two-hour commercial-free concert at the Stardust Wayne Newton Theatre, simulcast on Las Vegas' KOAS 107.5 “The Oasis”. Tim was also featured on the main stage at the former Hotel San Remo for the majority of those years. Finally, Tim served as the Assistant Music Director at both the former Desert Inn and Las Vegas Hilton hotels.

Prior to moving to Las Vegas in the early 1990s, Tim's music was an integral part of the Dallas jazz scene, allowing him to collaborate with producer Dave Zoller and great jazz pianist Randy Wensel. Tim also owned and operated his own successful jazz nightclub, 'Tim Ballard's', and featured local jazz combos, smooth artists, vocalists, and even fronted a 17-piece big band as vocalist himself. Finally, Tim was also voted Best Jazz Vocalist for several years' running in the (Dallas, TX) Spotlight Magazine reader's poll and was featured on the covers of both this publication and the prominent jazz magazine Texas Jazz.

Tim has released two solo albums, 'Singing Positive to the People' (soul classics) and 'Easy Does It' (Great American Songbook / “standards”). Today, TIMKAT is interested in partnering with world-class producers, studios, and songwriters to work on a third album of his music soon, either for general sale and distribution or for use in mass media (TV, film, commercials, ads, games, hold music, etc).

At present, Tim's music is featured on the worldwide Internet radio station RADIOIO.COM: "Vocal Jazz" channel, as well as on several Live365.com member stations. Tim's vocal standards album, Easy Does It, was also re-released in May 2008 for digital download through most major worldwide media outlets, such as iTunes (5 global zones), Rhapsody, Amazon, Napster, eMusic, and GroupieTunes. His vocal soul album "Singing Positive to the People", is slated for digital release in 2012.

To get a taste of the "TIMKAT Groove", please visit our official MySpace Music page at http://myspace.com/TimKatEnt, follow us on Twitter @timkatent, or visit Tim's Facebook Official site at http://www.facebook.com/timkatent. Email TIMKAT Entertainment for more information at [email protected]

Inductee, Kansas Music Hall of Fame (as member of Garry Mac and the Mac Truque), 2008

"It puts a smile on my face to know that I am bringing Tim Ballard to our listeners. He tells the story as he sings. It is not just recant ... it is emotion, voice control, and the delivery that draws us in." - Dr. Michael Matheny, Program Director, Classical and Jazz, RadioIO.com

"It's just plain tough for a male vocalist to make it in Dallas on his voice alone...but Tim Ballard has come out on top." - Dale McFarland, Texas Jazz

"It puts a smile on my face to know that I am bringing Tim Ballard to our listeners. He tells the story as he sings. It is not just recant ... it is emotion, voice control, and the delivery that draws us in." - Dr. Michael Matheny, Program Director, Classical and Jazz, RadioIO.com

"It's just plain tough for a male vocalist to make it in Dallas on his voice alone...but Tim Ballard has come out on top." - Dale McFarland, Texas Jazz

"Tim is a veritable vocal canon of the classics in popular American music. His sophisticated presentation is sure and stylish, even though his roots are firmly planted in rhythm and blues, rock and roll and jazz..." - Lou Rawls

"...amazing how smoothly he shapes sound into time and tune." - Redd Foxx 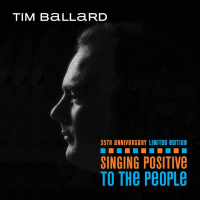 All About Jazz musician pages are maintained by musicians, publicists and trusted members like you. Interested? Tell us why you would like to improve the Kevin Mahogany musician page.