She’s been heard around the world as the host/ star of the syndicated public radio series Words and Music, but for thousands the most familiar way to enjoy the jazz stylings of Spider Saloff has been through live performances. The Chicago –based jazz vocalist has won accolades around the world for her introspective approach to the genre, most profoundly through her one-woman tribute to George Gershwin, The Memory of All That, conceived with the blessing of the Gershwin estate and headlining the Gershwin Centennial in St. Petersburg, Russia.

With full symphony orchestras or intimate jazz groups, Saloff is acclaimed as one of the great interpreters of the American Songbook. Saloff has composed multiple concert tributes to Cole Porter, Irving Berlin, Stephen Sondheim and many others. With her vocal partners, Dee Alexander and Frieda Lee, she performed The 3 Ellas Tribute to Ella Fitzgerald to audiences of over 26,000 at Chicago’s Millennium Park as well as many other venues.

Her major night club engagements included turns in Chicago at The Green Mill and Jazz Showcase and in New York at Birdland and Feinstein’s among many others nationwide.

As composer, playwright and actress, Saloff wrote a one-woman musical, The Roar of the Butterfly that played in Chicago, Los Angeles and Melbourne, Australia. Her original song When You See Me, a jazz/R&B tune has garnered over 100,000 views on YouTube.

She has taught master-classes in the UK, Italy, and all over the US with private students and group classes. Her philosophy in teaching is to work with the voice that is the individual and create a style that is unique and natural to that particular voice. Students have described working with Spider as “life changing”. Show less

KMP Is Proud To Present Award Winning Jazz Singer, Spider Saloff In A... 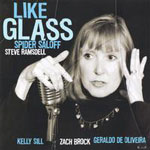 All About Jazz musician pages are maintained by musicians, publicists and trusted members like you. Interested? Tell us why you would like to improve the Spider Saloff musician page.