Growing up listening to music; country to Bach, Sandy was enamored with Ella Fitzgerald, Lena Horn and Blossom Dearie. In her teens Sandy was crazy for Doris Day and Shirley Bassey, then Cleo Lane. In her twenties, her sister Loretta, convinced her to sing professionally and her career was on it's way!! Sandy studied with some of the best teachers in the Delaware Valley, including voice and stage presence under the watchful eye of Bucky Harris and voice with Lenny Payton, former music coordinator on several New York based television shows.

After working the circuit for eight years, including radio and TV, Sandy left the music business to raise her family, never thinking to sing, professionally, again. Twenty-five years later, after having spinal surgery behind her voice box, and wearing a neck brace for 3-1/2 months, there was concern that she would not be able to sing again. It was a very long 3-1/2 months! Once the brace was off, the work began; get the voice back!! A year later, Sandy was working clubs in Portland and 2-1/2 years later Darrell Grant produced and arranged her premier CD. 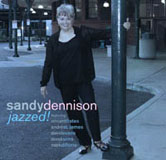 All About Jazz musician pages are maintained by musicians, publicists and trusted members like you. Interested? Tell us why you would like to improve the Rachel Lauren musician page.