She regularly performs worldwide at jazz festivals, jazz parties, and on jazz cruises. She has been a frequent guest on National Public Radio’s ‘Fresh Air’ with Terry Gross, has appeared on ‘A Prairie Home Companion’, and with Michael Feinstein at Carnegie Hall.

She has performed with the Statesmen Of Jazz, dedicated to perpetuating the art of jazz for future generations.

She is honored to have been inducted (in 2010) to the Oregon Music Hall of Fame and to the Jazz Society of Oregon’s Hall Of Fame, and to have been invited to perform at New York’s Mabel Mercer Cabaret Convention for three years at Town Hall and Lincoln Center. She was the guest of honor at the 2013 Roswell Jazz Festival, and honored as a Jazz Legend at the San Diego Jazz Party in 2016.

Feinstein's At Loews Regency Presents The Return Of Acclaimed Vocalist...

Acclaimed Vocalist Rebecca Kilgore Returns to Feinstein's in "Some Like...

Other Places: Kilgore in New York

Rebecca Kilgore and PDXV in Concert 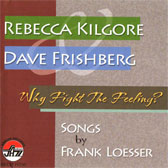 Why Fight the Feeling?

All About Jazz musician pages are maintained by musicians, publicists and trusted members like you. Interested? Tell us why you would like to improve the Rebecca Kilgore musician page.