Based in Las Vegas, vocalist Ryan Baker has been singing in all types of venues and appearing in production shows all over North America for well over a decade. Originally from Long Island, NY, Ryan moved to Vegas in October 2003, where he began performing at weddings and corporate events at just about every major casino property in town, with performances ranging from Frank Sinatra “sound-alike” to impersonating the man himself.

In 2005, Baker helped create and became one of the stars of the original tribute show “Shades of Sinatra”, which received the Entertainment Consumers’ Exchange “Tribute Show of the Year” award in 2007, 2012, & 2014. The “Shades” also had the privilege of opening for the one and only Don Rickles twice, at the Golden Nugget in 2007 and the Orleans in 2010.

Since 2008, Ryan has played the role of Frank Sinatra in “Drinkin’, Singin’, Swingin’”, a salute to the legendary Rat Pack produced by Rick Michel, touring in the US and Canada. Baker also portrayed the Chairman of the Board in David Cassidy’s production show, “The Rat Pack Is Back!” at Connecticut’s Mohegan Sun Resort & Casino in 2008. Starting in January of 2010, Baker has filled in for the Frank, Dean, and Joey roles in “Sandy Hackett’s Rat Pack Show", both in and out of Las Vegas.

In 2012, Ryan was asked to be the featured performer at the Opening Session of the Midwinter Meetings of the Chicago Dental Society, performing an original Sinatra vocal tribute act with a legendary quartet of musicians from Las Vegas, who had all played with Sinatra himself.

Besides tribute artist/impersonator work, Ryan is also an accomplished jazz singer. In 2016, he released an album called Timeless Again featuring his own takes on some of his favorite jazz standards. With arrangements by gifted guitarist Joe Lano, the album features a small group of world-class musicians and has been received with critical acclaim as well as widespread radio play. Since then, Ryan has become a regular feature at the Dispensary Lounge, a jazz club in Las Vegas, and has also appeared at jazz clubs elsewhere, most recently Jazz at Kitano in New York.

Baker’s latest project is a show he created called “Big Band Crooners”, in which he performs with a 17-piece band, doing big-band arrangements made famous by singers such as Sinatra, Dean, Bobby Darin, Harry Connick, Jr., and Michael Bublé. The show debuted in the summer of 2018 at the Italian-American Club in Las Vegas to a sellout crowd and rave reviews.

While still considered a young entertainer, it is clear that Ryan Baker has an “old soul” and a deep appreciation for the kind of music created by these legendary artists. As radio host and jazz critic Ed Blanco writes in his review of Ryan’s album, “singing timeless classics seems to be something [Baker] was born to do from the beginning[.]” Show less

"Performing both obscure gems and transformed versions of standards... Baker indeed does justice to these timeless classics during with his impressive debut." —Scott Yanow, jazz historian and journalist 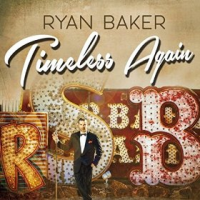 All About Jazz musician pages are maintained by musicians, publicists and trusted members like you. Interested? Tell us why you would like to improve the Ryan Baker musician page.