Richard Underhill's wonderful warm alto sound, great writing and arranging skills and in-from-the-outside soloing make him one of Canada's most distinctive jazz performers. Richard won a 2003 Juno Award for his jazz solo debut 'Tales from the Blue Lounge' and was nominated for the Prix du Jazz at the 2003 Montreal Jazz Festival. The founding member of Toronto's acclaimed Shuffle Demons, he has toured Europe and Canada to critical acclaim for over 22 years. A truly original jazz composer and arranger, Richard's exciting original music captivates audiences with singable melodies, outstanding musicianship and engaging performances. His new album 'Moment in Time' is a fan favourite and has garnered significant critical acclaim. 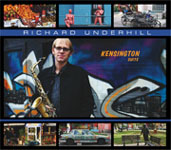 Tales From The Blue...

From: Crazy Time
By Richard Underhill

All About Jazz musician pages are maintained by musicians, publicists and trusted members like you. Interested? Tell us why you would like to improve the Richard Underhill musician page.