Marlon Simon One of the main exponents of Latin Jazz today... Educator, Percussionist, Composer Marlon Simon was born in the small town of Cardon Venezuela. His first contact with music, at the age of 10 through his father who father a singer and guitarist. In his homeland Marlon learned the rudiments of Latin dance music on his own. By the time he was 18, Simon had organized his own band and had begun performing locally at concerts and clubs, often opening for major national acts. Later he became interested in Jazz and African originated music. He came to the United States in 1987 and began formal studies on drums at The University of The Arts in Philadelphia 1989, later obtained his Bachelor of Arts degree in Jazz and Contemporary Music from the New School for Social Research. During his studies, Mr. Simon worked locally in the city for many years developing his unique style and gaining the respect of noted jazz and Latin musicians. As a drummer and percussionist he worked with such luminaries as Hilton Ruiz, Dave Valentin, Jerry Gonzalez, Charles Fambrough, Bobby Watson and Chucho Valdez to mention a few After several years, he formed his own Latin jazz ensemble, Marlon Simon and the Nagual Spirits. With his own group Marlon got the opportunity to showcase his talents as a composer and drummer defining a distinct approach to Latin Jazz. Simon has since released five recordings: The Music of Marlon Simon for K-Jazz Records (1999), Rumba a la Patato for Ubiquity (Cubop) Records (2000) "Live in Bolivia" for Intrigue Records (2004), In case you missed it,(2012) Jazz heads ,The French Venezuelan project, (2010), Chantilly records and Marlon Simon French Latin Jazz project. (2012) Chantilly records. His name appears on more then 40 records as a sideman and his music has taken him him around the world. Parallel to his career as a performer, Simon has also become recognized as an in- demand educator as a specialist in Afro-Caribbean rhythms. He has conducted workshops, master classes and seminars on numerous colleges and universities in the USA and abroad. Marlon Simon is the recipient of the following grants and awards: Chamber music America new works, The Philadelphia Music foundation grant, New Jersey council of the arts composition grant, The new jersey Governor’s award in arts and education, Meet the composer, Department of State grant to present international concerts, Claremont Ferrand department of culture grant in France.

Marlon Simon is the recipient of the following grants and awards: Philadelphia music foundation award: for his outstanding talent and contribution to music in Philadelphia. Meet the composer grant: to travel to Cuba and do research on Afro Cuban music and it's influence on American Jazz music. New Jersey Governor's award in arts and education: for his contribution to New Jersey public schools. New Jersey council for the Arts: composition grant. USA department of State grant: to present international concerts representing the highest quality of Latin jazz born in the USA with his band The Nagual Spirits. Chamber music America grant: new jazz work. Claremont Ferrand music project grant in France: to conduct master classes on Latin Jazz to french musicians, present concerts and produce a record. Face grant: French American cultural exchange, to present concerts in the USA with Marlon Simon Latin Jazz french project.

Marlon Simon at the Painted Bride Art Center on December 1, 2007

Simon is a Venezuelan born percussionist, composer, educatdor and band leader who immigrated to the U.S. bringing with him a fine feel for Latin Jazz and a gift for composition. —Eugene Holley, Billboard.

Marlon Simon has appeared in numerous recordings with other well known jazz greats. Parallel to his career as a performer, Simon has also become recognized as an in-demand educator as a specialist in Afro-Caribbean rhythms. He has conducted workshops, master classes and seminars at Temple University, Penn State University, Rutgers University, the New Jersey ABC conference for public school teachers, the University of the Arts and Perkings Center for the Arts

Marlon Simon has appeared in numerous recordings with other well known jazz greats. Parallel to his career as a performer, Simon has also become recognized as an in-demand educator as a specialist in Afro-Caribbean rhythms. He has conducted workshops, master classes and seminars at Temple University, Penn State University, Rutgers University, the New Jersey ABC conference for public school teachers, the University of the Arts and Perkings Center for the Arts. He has also served as an Artist-in-Residence at numerous public and private schools in the tri-state area and abroad. In the year 2000 he was named the distinguished teaching artist in recognition of a history of commitment of excellence in the Arts and Education and for receiving the highest regard of your Arts and Education peers issued by the New Jersey State Council of the Arts. In the year 2001 Marlon received The New Jersey Governor's award in Arts and Education. In June 2001 Marlon performed as a guest solo artist and conducted seminars at The Ultimate Drummers weekend, the largest drumming event in the southern hemisphere in Melbourne, Australia. In 2003 Marlon Simon and the Nagual Spirits were selected to present two international concerts representing the excellence of artistry developed in the US sponsored by the fund for the US artist and the State department.

In Case You Missed It

In Case You Missed It 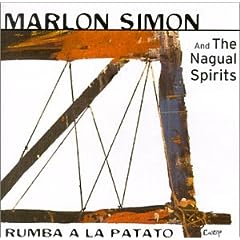 All About Jazz musician pages are maintained by musicians, publicists and trusted members like you. Interested? Tell us why you would like to improve the Marlon Simon musician page.