Music has always been a necessary element in Lindsey Muir’s life as far back as the 25-year-old singer can remember. Throughout her life and, most especially now with the recent release of her debut album "You’re Nearer: Love Songs of the ‘30s and ‘40s," Lindsey is scurrying right towards the music, more than ready to be a prime time player in her own right. She had her festival debut at the Litchfield Jazz Festival this past summer and recently relocated to New York City to further her jazz career.

Her new CD allows her to use her sweet voice to interpret great romantic ballads, with first-class backup from a jazz combo featuring the noted saxophonist and arranger Don Braden. Lindsey’s other simpatico all-star sidekicks are: guitarist Mark Whitfield, pianist Dave Berkman, drummer Winard Harper and bassist John Benitez. She also gets a little help from her friends, trumpeter Terell Stafford (on "Something Happens To Me") and Brazilian drummer Rogerio Boccato, who adds Latin seasoning to a buoyant bossa rendition of "This Time the Dream’s On Me."

Lindsey has impeccable pitch, clarity of diction, silken phrasing, breath control, rhythmic ease, a pretty, pinging timbre, harmonic sophistication and a subtle sense of dynamics. She projects the feeling that she’s loved, lived with, and been deeply moved by the 11 songs on her album. Part of the secret of her winning personal style is that she can sound sweet and innocent, yet somehow simultaneously sophisticated and emotional.

Her album could have remained merely a dream deferred but for its basic inspiration•Lindsey’s dramatic discovery of the ballad, "It Is Love You’re After?" written by her late grandfather, Dick Bivona for her grandmother, Victoria. She discovered the tune as her grandmother was passing away in the Spring of 2003. Her grandfather’s love song became the catalyst for Lindsey’s CD, which, of course, she dedicated to her late grandmother.

“These tunes represent material...that has not been overexposed, and, as such, it is a pleasure to revisit them. Muir's preference to leave the verses intact is also a treat.” --Michael P. Gladstone, allaboutjazz.com

"Muir is a solid charmer from start to finish.” --Chris Spector, Midwest Record

"Her voice is pure and sparkling, her range impressive.” --Christopher Loudon, JazzTimes

"She has a sweet voice and her sincerity, phrasing and sense of swing are winning." Scott Yanow, All Music Guide

"Lindsey is a gifted singer with a sophisticated grasp of lyrics and an engaging, bittersweet way with melody." -- Owen McNally - The Hartford Courant.

"The best of both worlds, Muir has the charm of youth combined with the talent for reliving the best of the past. It's a Muir-tini, a new, tasteful twist on the classics appealing to both old and new lovers of jazz." -- Kellie McGuire, Waterbury Rep-Am

"The album is a thumbs up...and not just a stab at entertaining!" Looking forward to "...seeing how high [her] star rises". -- Dave Hersh, NewOrleansRadio.com

"A fresh new talent with a wonderful flair for the tradition and a gentle approach to bringing the lyrics of classic songs to life.” -• Mark Whitfield, guitarist 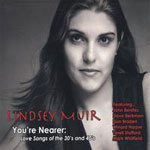 All About Jazz musician pages are maintained by musicians, publicists and trusted members like you. Interested? Tell us why you would like to improve the Lindsey Muir musician page.