Alex Levin has a rich and varied musical background. Born into a family of musicians, he was drawn to the piano at an early age. He began performing on the instrument when he was fifteen, and he hasn’t stopped since.

After studying piano and composition at The New School Jazz Program in New York, he received his degree from Brown University. He moved to Berlin in 1998, where he founded his own trio and quartet. Both groups were popular and critical successes, and his name was found on the bill at many European jazz festivals. He appeared at such popular Berlin jazz clubs as A Train, B Flat, and Cafe Bebop.

Since returning to New York City in 2001, Alex has been extraordinarily busy. He has recorded and released three popular and well-reviewed CDs, Night and Distance (2005), A Reason for Being Alone (2006), and New York Portraits (2010). In 2008 his trio worked and taught as artists in residence at Middlebury College's prestigious Bread Loaf School of English.

Alex currently performs weekly gigs at Manhattan Youth Downtown Community Center in Tribeca. His all-ages show continues to grow in popularity amongst area children and adults alike. Please come down and check out the band on Fridays from 7-9. Performances are free. 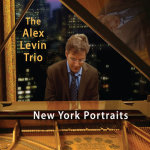 A Reason for Being...

A Reason For Being...

All About Jazz musician pages are maintained by musicians, publicists and trusted members like you. Interested? Tell us why you would like to improve the Alex Levin musician page.