Julian Costello is a London-based saxophonist, composer and teacher. He composes music for his group and other ensembles. The latest album from the Julian Costello Quartet is called Connections; Without Borders and is released on 33Jazz records. It was recorded in Oslo and features highly in demand International musicians. Connections was recorded and mixed by Sebastian Ohmert in Berlin and is a truly cross European album telling stories and joining up music across borders and artificial lines that can separate us. Transitions, the last album by the Julian Costello Quartet was also released on 33 Jazz Records and It was recorded at Artesuono Studios in Italy and mixed and mastered by ECM engineer Stefano Amerio. This quirky quartet has completed three tours of the UK with support from The Arts Council of England and concerts in France, Germany, Poland and Belgium. It features International musicians Maciek Pysz on Guitar, Yuri Goloubev/Jakub Cywinski/Michele Tacchi on Bass and Adam Teixeira on Drums. Julian is also a private teacher and runs Jazz based workshops.

Saxophone London modern jazz teacher Mountains, Love & Humour Julian Costello
Julian Costello is a sax lyricist, telling his stories of life’s ups and downs with perfect alteration of tone to impart strength, humour and even frailty at times whilst the other players intuitively alter their stances, apart from their solo passages, where their inner nature springs to the fore. This is a great album, strong, tenacious in its quality and simply makes a great listen. “Sammie Stein “This is highly melodic music that is readily accessible, but consistently intriguing and full of rhythmic sophistication. It all makes for a very distinctive album and one that deserves to do well” Ian Mann. “Once in a while, an album like this appears on the horizon, becoming the unputdownable “Earworm” that Costello portrays at the heart of his colourful recording” Adrian Pallant London Jazz News.

PGCE Music. Post Graduate Certificate in the Saxophone Trinity College of Music. Mondays and Tuesdays only. 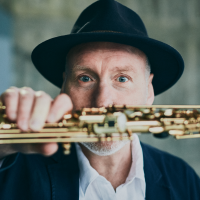 All About Jazz musician pages are maintained by musicians, publicists and trusted members like you. Interested? Tell us why you would like to improve the Julian Costello musician page.