Jeri Southern, was a classically trained pianist who became a jazz-oriented vocalist in the 1950s, whose hit "You Better Go Now" proved the most successful of her several recordings.

Born Genevieve Hering, on 5 August 1926, in Royal, Nebraska, Southern studied at the Notre Dame Academy, Omaha, and later played piano at the local Blackstone Hotel. After touring with a US Navy recruiting show, where she began singing, she worked at several venues in Chicago in the late 40s. These included the Hi Note Club, where she supported stars such as Anita O’Day.

After obtaining a nightly spot on television, Southern was signed to Decca Records and had US Top 30 hits with ‘You Better Go Now’ (1951) and ‘Joey’ (1954). Her wistful version of ‘When I Fall In Love’ established her as a favorite in the UK, where she also had a Top 30 hit with ‘Fire Down Below’ (1957). She then switched to the Capitol Records label and made the highly acclaimed “Jeri Southern Meets Cole Porter,” which featured a set of humorous arrangements by Billy May, including a 20s setting of ‘Don’t Look At Me That Way’.

One of her many album releases, “When I Fall In Love,” which was released by MCA Records in 1984, contained several numbers closely identified with Southern including “An Occasional Man.”

She retired from performing in the mid-60s to become a vocal and piano coach for professional artists. She subsequently moved to Hollywood, and worked on arrangements with the film music composer Hugo Wilhelm Friedhofer, and later, cared for him. She also published a book, Interpreting Popular Music At The Keyboard.

In 1991, her last public performance was at the Vine Street Bar And Grill in Los Angeles, where she was persuaded by Anita O’Day to emerge from the audience and play a medley of Jerome Kern songs. She died of pneumonia six months later. 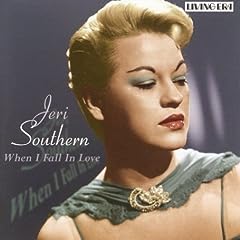 When I Fall In Love

When I Fall In Love

All About Jazz musician pages are maintained by musicians, publicists and trusted members like you. Interested? Tell us why you would like to improve the Jeri Southern musician page.