If Jen Rathbun were an actress in the 1940s, she would have owned the part of the smart dame who wore killer suits and spouted off snappy one-liners.

Instead, she's a modern-day musician who sings and writes clever tunes loaded with personality

You're in a smoky little club downtown. The crowd is noisy, self-involved. And then this gorgeous blonde fires off an amazing riff on her keyboard. Conversations die down as she begins to croon out a jazz ballad. It's not some throwback oldies cover, but a pull-forward, nouveau cabaret, this-genre-ain't-dead-'til-I-say-it's-dead fresh new sound. Some guy in back shushes the drunk at the next table — he feels that immediate connection. She's telling him that, "All I want is you / ... / My lips are licked / I'm not that strict / This'll take a minute or two." The song ends and the audience cheers enthusiastically. He is momentarily weirded out — it had seemed as if she was singing just to him, but they all must have heard it. Then she's moaning out, "I feel nasty / ... / I'm with him / But you are near / Tickling my thoughts / And teasing my fears." It's obvious to him that all the others are mistaken. It's him she's singing to. Later he'll tell his girlfriend, a little sheepishly, about the powerful contact he felt and she'll look at him funny. She's a little smarter than he is and doesn't tell him how that blonde gave voice to her own innermost thoughts when she cried out, "Why are all the good men / Married, buried, or gay? / Why do all the wrong guys / Seem to head my way?" Maybe her soon-to-be-ex hadn't heard, "Some things are better rich like coffee, chocolate, and men."

Those two may not stay together much longer, but they are sure to join the cadre of loyal Jen Rathbun fans. Houston jazz devotees follow her from venue to venue and snap up her CD's like junkies seeking a fix. There's just no one else out there doing what she's doing, just no one else out there who seems to be singing just to them. Each has there own favorites: "Cool Cat", "Cereal Rag", "Doctor of Love", "Coffee, Chocolate & Men"—she calls out for requests and the air fills with shouts of twenty different favorites.

Listen and judge for yourself. See if she doesn't have something to say just to you. 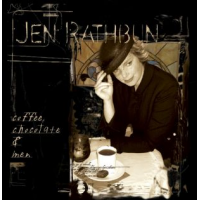 All I Want Is You

All About Jazz musician pages are maintained by musicians, publicists and trusted members like you. Interested? Tell us why you would like to improve the Jen Rathbun musician page.