From small town Midwest beginnings to the big-time as an internationally known saxophonist, Grady Nichols enjoys an audience as broad as his musical taste. Hot off the success and critical acclaim of last CD, Sophistication, Grady’s goal was to record a CD that reflected his broad range of musical influences and tastes. To accomplish this, he tapped Zac Maloy to produce his newest endeavor, Take Me With You.

Maloy’s musical versatility includes writing, producing and performing. He is the founder and front man of the MCA Records band, The Nixons and also produced The Vanished, Bowling For Soup (Jive Records) and Jonas Brothers (Hollywood Records). His songs have been recorded by multi-platinum act Bowling For Soup, former American Idol’s Chris Daughtry and others. Maloy’s modern rocker background coupled with Grady’s R&B/jazz stylings proved to be the winning combination. The result of their collaboration is a sound that is fresh, unique, and embraceable by anyone who likes a good beat with a memorable melody.

Grady’s depth and maturity as a songwriter are evident on Take Me With You as the project showcases smooth jazz, pop, adult contemporary and even a dance mix. “My influences are so varied and I try to reflect that in my music. As I’ve matured as a songwriter, that growth has allowed me to infuse more of myself into each record. Using this mixture of flavors has helped me to create a sound with widespread audience appeal. As a result, you’ll see people of all ages at my shows. With Take Me With You, I’m trying to capture something new and fun that is another layer of my musical personality.” Grady co-wrote five songs with Maloy, who is rapidly becoming one of the most sought-after songwriters in pop music today. Jazz great Jeff Lorber teamed up with Grady once again to co-write three of the tunes.

Take Me With You also features four vocal tracks including a remake of the hit “Every Kind of People” made famous by Robert Palmer. Leigh Nash, formerly of Sixpence None The Richer (“Kiss Me,” “There She Goes”) provided lead vocals on this upbeat yet poignant song. Toni Estes (recording artist and Grammy nominated songwriter) contributed vocals on “Give Love.” And as a bonus track, famed remix engineer Andy Caldwell created a house mix of “Take Me With You” to end the CD on a fun beat.

Ironically Grady’s rural upbringing in Siloam Springs, Arkansas contributed to his discovery of the hip sounds of the saxophone. He fell in love with the instrumental music played on The Weather Channel and wrote the network requesting their playlist. Grady began his musical pursuits in the sixth grade. By high school, he was performing professionally and studying under legendary saxophonist Joe Davis, who had performed with such greats as Sarah Vaughn and Mel Torme.

He recorded three independent projects before assembling a team that would put him on a national stage and enable him to enjoy success in the smooth jazz genre. Grady approached Grammy-nominated recording artist Jeff Lorber to produce and Grammy Award-winning producer Paul Brown to mix. Other artists contributing to Sophistication include Grammy Award-winning Chris Botti (trumpet on “End Of The Night”) and Paul Pesco (rhythm guitar with credits including Madonna, Mariah Carey, Celine Dion and Jennifer Lopez.) Again, it was another winning combination. Yielding three hit singles -- “Allright,” “Tuesday Morning,” and “Sneak” -- Sophistication also made a strong debut on internet stations and remained on the SmoothJazz.com charts for over 40 weeks. SmoothJazz.com named Sophistication #28 of top 50 Smooth Jazz Albums of 2004 and gave it a Smoothie Award as the #14 top selling Smooth Jazz Album of 2004. Café Jazz Radio named Sophistication the #8 Most Played Album of 2004 and Grady as the #3 Breakthrough Artist for the Year. The reviews were also great and well-known jazz critic and writer Jonathan Widran named Grady as “most likely to spearhead the next generation of great smooth artists.”

When Sophistication broke nationally, Grady suddenly found himself sharing the stage with some of his musical idols and touring the country in clubs, at festivals and was even chosen to perform on Norwegian Cruise Lines Smooth Jazz Cruise. As a touring artist, Grady has opened for artists such as: Ray Charles, Luciano Pavarotti, Jay Leno, The Temptations, The Righteous Brothers, Al Green, Huey Lewis & the News, The O’Jays, Jeffrey Osborne, Ellis Marsalis, Keiko Matsui, Stanley Turrentine, David Benoit, Paul Taylor, among others. He has also performed with: Jeff Lorber, Bill Champlin, The Beach Boys, Roy Clark, Bob James, Paul Brown, Kim Waters, Wayman Tisdale, Marion Meadows and others.

Grady was also a featured performer and an award presenter at the first Oasis Smooth Jazz Awards. His song “Alone With You” was included on the Oasis Smooth Jazz Awards Collection CD and received rave reviews. Mark Ruffin, Jazz Editor, Chicago Magazine and Amazon.com said "Newcomer Grady Nichols may have the best instrumental track on the sampler.”

Grady’s first foray into recording came with his first CD, Between You and Me, which immediately received regional radio airplay, a rarity for a new independent artist. Grady followed this success with the release of Mysterious Intentions, allowing him to showcase his songwriting talents and gain radio exposure from coast-to-coast. Grady's third release In the Fullness of Time featured Grammy award-winning singer/songwriter Bill Champlin, keyboardist / vocalist of the group Chicago, alongside a 50 voice choir. Champlin himself had praise for Nichols, “This guy is really young. He’s really positive and he’s got maturity way beyond his years. His tone…his delivery…everything about him. There’s a lot of guys out there with chops. Grady uses the chops to get to his heart and from his heart it gets to you.” The CD was recorded before a live studio audience and aired on television as "Grady Nichols Live." It shows the diversity of Grady's sound and stage presentation using elements of jazz, reggae, Latin, blues and gospel.

With four released CDs and a fifth on the way, Nichols’ future is as bright and promising as his enthusiasm for the music. “Music is intimately connected to so many great moments in my life. And to my way of thinking, that’s the purpose of music -- creating something that enhances memories and moments, binding them together. I am so blessed to have the opportunity to do that. That’s my goal -- helping to create great moments and memories for people through music.”

• Legacy Tribute Award from the Oklahoma Jazz Hall of Fame (2004)

• Best Musician Award / The Best of The Best 2008 / Oklahoma Magazine

• Sophistication debuts on the SmoothJazz.com charts and remained on the chart for 40+ weeks

• #3 Break through Artist for the Year by Café Jazz Radio

Grady Nichols Releases "Take Me with You"

Take Me With You 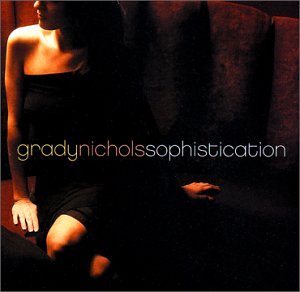 All About Jazz musician pages are maintained by musicians, publicists and trusted members like you. Interested? Tell us why you would like to improve the Chieli Minucci musician page.