The title of Nick Colionne’s highly anticipated KOCH Records debut says it all about the charismatic Chicago-based guitarist’s rich, sizzling mix of jazz, R&B, funk, blues and seductive vocals. In his hard-grooving, supremely soulful world where he’s always, to quote the title of his hit 2006 album, Keepin’ It Cool, there are truly No Limits.

“I went into the project with the mindset of doing a record that was more diverse than any I have done previously.” Colionne says. “I like to call No Limits an adventure because I wanted to explore doing some different things with my music and not limit myself to one genre or style of playing. I’m playing over some different grooves, setting some unique moods and incorporating sounds from other genres, but I’m still staying true to who I am. There’s still my own vibe on the guitar shining through. Besides exploring my passion as a vocalist more than ever before, I wanted No Limits to be a closer reflection of the diversity and spirit of my live shows.”

Since blasting out of “The Big Windy” onto the national contemporary jazz scene in 2003, Nick Colionne’s career has been in ecstatic overdrive, perfectly embodying the crackling energy of his breakthrough mega hit single “High Flyin’,” which hit #2 on the Radio & Records airplay chart and was one of the genre’s Top Ten songs of the year. After hitting further pay dirt with his follow-up Top 20 single “It’s Been Too Long,” he kept up his chart busting ways with “Always Thinking Of You,” the single from Keepin’ It Cool (which itself was a Top Ten Billboard Contemporary Jazz hit) that stayed on the R&R chart for an incredible 45 weeks and was also a Top Ten single of the year at radio as well as the Number One global internet radio jazz single of the year. At the 2007 Canadian Smooth Jazz Awards, he succeeded Chris Botti as “International Instrumental Artist of the Year.”

As powerful a presence as he is on the airwaves, the real Colionne magic happens onstage, where his live performances truly defy categorization. One of most compelling headliners in urban jazz, the supremely stylish performer (whose crisply tailored, colorful outfits have earned him raves as the “best dressed man in jazz” as well as a clothing endorsement from prestigious men’s clothier Stacy Adams) has kept up a breakneck schedule of over 100 live dates a year while whipping audiences into a frenzy with his bluesy jamming, heartfelt singing (his soulful take on “Rainy Night In Georgia” is a long time fan favorite), blazing jazz licks and—”harkening back to the first professional gig he ever did at 15—”even a hint of heavy metal.

WGN-TV and Radio may have proclaimed him “Wes with a new millennium twist,” a reference to Colionne’s primary guitar influence Wes Montgomery, but this legendary connection is only one part of Colionne’s musical evolution. Coming of age on Chicago’s West Side, he played in rock bands for years and performed and toured with some of the legendary R&B icons of our time, including Natalie Cole, Al Green, The Chi-lites, The Impressions, Curtis Mayfield and The Staples Singers. Likewise, Colionne’s blues edge comes from years of honing his chops at clubs throughout the city. When asked about the connections between genres, he likes to quote one of jazz’s premier legends: “In the words of Miles Davis, if you can’t play blues, you can’t play jazz.”

Beyond his status as a top headliner for shows and festivals across the country, he has also become legendary among fans for his electrifying performances on each of the annual All-Star Smooth Music Cruises (now the Smooth Music Cruise) since 2005 and for hosting the after hours “Nick At Nite” jam sessions. His quick wit and expert comic timing also served him well as the host of this year’s Seabreeze Jazz Festival on Florida’s emerald coast.

Sticking to the crisp, emotionally explosive vibe he creates with his two preferred guitars, the Epiphone Broadway Elitist (he’s an official Epiphone endorsee) and the Gibson L-4, Colionne co-produced most of the eclectic tracks on No Limits with two longtime members of his band, keyboardist John Blasucci (who co-wrote “High Flyin’”) and bassist “Hollywood Dave” Hiltebrand (who co-wrote “Always Thinking of You”). The guitarist also co-wrote and co-produced tracks with two Grammy‚ Award winning songwriters, penning the coolly rockin’ bluesy vocal track “Hard Line” and the lush “Melting Into You” with Jim Peterik (who wrote the classic rock hits “Vehicle” as a member of Ides of March and “Eye of the Tiger” when he was with Survivor) and the tender, wistful ballad “Anyway” with Colionne’s cousin Paul Richmond (who wrote and produced “Shining Star” for The Manhattans). No Limits closes with a beautiful instrumental version of “Anyway.”

For both longtime Colionne fans and newcomers to the experience, the most exhilarating part of embarking on a journey with No Limits is embracing all those wild, unexpected stops along the way. After the high energy, retro, jangling guitar-driven first single “No Limits,” which is truly “all things Nick,” he grooves full-throttle into the urban dance phenomenon known as the Steppers’ Circuit with the thumping retro-funk of “Steppin’ Back.” Colionne tips his trademark hat—”and he’s always wearing a cool one when he performs live—”to his beloved hometown on the high energy, organ infused “The Big Windy Cat,” then smooths the pace with silkier tracks like “Until Tonight” and the breezy and tropical, Brazilian-flavored “Ports of Call,” which he and Hiltebrand wrote during their third musical cruise to the Caribbean. As he’s done on all of his past albums, Colionne pays homage to Montgomery on the thoughtful and atmospheric “Headin’ Wes Before Dawn,” and then funks it up big time with his tribute to another major inspiration, James Brown, on the fiery, horn-drenched jam “Godfather J”. For Colionne and No Limits, there are no recognized boundaries, only the joy and passion of the music he loves.

Colionne’s breakthrough onto the national scene in 2003 with Just Come On In invited the world to experience the ongoing funky jazz party that had been happening in the Chicago area for many years. Checking out his band’s electrifying shows at Navy Pier, Taste of Chicago and local hangs like The Metropole, The Backroom and The Isaac Hayes Club, jazz and urban listeners in the guitarist’s hometown got hip early to his cool and melodic, groove intensive persona. Beyond his steady stream of gigs, Colionne’s first three discs—Its My Turn (1994), Arrival (1996) and Seduction (1999)—”received substantial airplay on The Windy City’s WNUA and beyond, and exciting critical acclaim from Jazziz Magazine, JazzTimes, JazzReview.com and WGN TV/Radio.

He started learning guitar at age nine from his stepfather Edward, and was such a quick study that he soon formed a trio with his brother and started performing at talent shows (Colionne’s father was the group’s manager). Gigging professionally by 15, he was usually the youngest member of the band so he would sometimes paint a mascara mustache on his upper lip to make himself look older; a classic Colionne story finds him greatly embarrassed when his grandmother, attending one of his concerts, promptly wiped the mustache off with her handkerchief.

The recipient of the 1996 Malcolm X College Alumnus of the Year Award (he earned his degree there in music), Colionne has devoted much of his spare time these past twelve years to mentoring children at St. Laurence K-8 School in Elgin, Illinois. His roles include counseling, teaching music, computer music skills and guitar, and directing the talent shows and holiday pageants. His relationship with the students doesn’t end when they move on to high school, and he has watched with pride as “his kids” have entered college, the army and even marriage!

“The most exciting part of all of this for me is that I’m actually living my dream, getting a chance to play guitar for people in so many places,” says Colionne. “I go into every live performance like it’s the last time I’ll ever play, giving the fans the best I have to offer that day no matter what’s going on in my life offstage. I find that a unique metamorphosis takes place between the time I leave the wings and get to the front of the stage, and in that moment, I turn on and give them everything I’ve got. The main goal is to let everything flow naturally and make it fun for the audience. The greatest moments come when I look at their faces and realize that I’m making them feel the same joy that I’m feeling. It’s always gratifying when the people around me believe in my music the same way I do.”

It’s clear that for Nick Colionne there truly are No Limits. 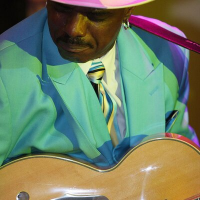 All About Jazz musician pages are maintained by musicians, publicists and trusted members like you. Interested? Tell us why you would like to improve the Nick Colionne musician page.