Blue Lu Barker’s risqué song of 1938 “Don’t You Feel My Leg,” launched a career that would continue until her death in 1998. She was a singer and dancer in her native New Orleans where at the age of 13 she ran off with guitarist Danny Barker for New York in 1930. Accompanied by Barker she became very popular in New York and often they shared the billing with Cab Calloway and Jelly Roll Morton.

After signing on with the Vocalion label in ’38, her first record was “Don’t You Feel My Leg.” This went on to become a huge national hit and the song associated with her. The song was covered by Maria Mulduar in the ‘80’s, giving it a new life and audience.

She continued to perform and record until she retired from 1949 to 1964. The Barkers then returned to New Orleans in 1965. She took another brief hiatus from 67-73, then came back with a vengeance.

The Barkers continued to perform together until his death in 1994. Blue Lu was inducted into the Louisiana Hall of Fame in 1997, and then went back on stage leading up to a final recording at the New Orleans Jazz Festival in 1998. She died shortly after in the same year. Her funeral was a major event and most of city turned out to give her a proper New Orleans send off. 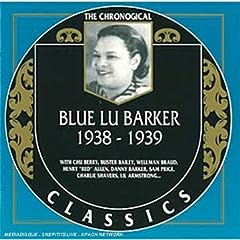 All About Jazz musician pages are maintained by musicians, publicists and trusted members like you. Interested? Tell us why you would like to improve the Blue Lu Barker musician page.