Swedish born Hildur Alice Nilsson, professionally known as Alice Babs first appeared publicly at the age of twelve, and she achieved instant fame. Her first hit recording was a song known in English as “The Yodeling Girl”. A string of Swedish film roles turned her into a teen movie star. She sang with famous classical musicians, performed for the Swedish Royal Family, and during World War II played for soldiers with popular acts like Sammy Davis.

The first exposure Babs had to America was in 1962 when she toured with the Swe-Danes, a trio made up of Babs, guitarist Ulrik Neumann, and violinist Svend Asmussen. The trip was a big success, landing the group several high profile gigs and an appearance on the Ed Sullivan Show. In 1963, when Duke Ellington was asked to appear on a Swedish television program, he began a search for a European singer to perform with his band. He was given a stack of records to listen to, and declared the search over upon hearing the voice of Alice Babs. “Come Sunday” and “Take the 'A' Train” were recorded for the show, with Babs on vocals. When there were no words left to sing she amazed everyone by turning her voice into a band instrument, singing solos she had heard Rex Stewart and Ben Webster play on previous Ellington recordings.

Their most important collaboration, however, came with the Sacred Concerts, Ellington's heartfelt tribute to God. The first Sacred Concert was performed live only three times. “There were times during the performances when I had difficulty controlling my emotions. In the cathedral it was very beautiful...” the lighting, and the massive congregation! I had to remind myself that I was not the one to be moved, that the message was designed for the listeners.”

After performing in Europe for a number of years, Babs retired in Spain due to health problems. She went back on tour in 1998, selling out theaters across Europe. Her voice as strong as it ever was, and she still sings Ellington tunes whenever she gets the chance. 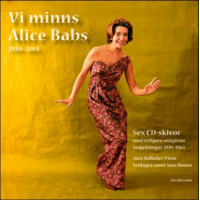 As Time Goes By

All About Jazz musician pages are maintained by musicians, publicists and trusted members like you. Interested? Tell us why you would like to improve the Alice Babs musician page.