The highly disciplined, truck driving, pavement pounding, nail banging, Civil War buff (His self-renovated fixer-upper even dates back to 1865), and proud papa of three debunks popular music mythology: classical musician does not equal jazz artist. Adam Unsworth, French hornist with The Philadelphia Orchestra since 1998 embraces the jazz idiom with the same guile and gusto as he does everything else in life.

At age 10, Unsworth confided in his first horn instructor, a professor at the local University, “I’m going to be principal horn of The Philadelphia Orchestra.” Well, almost, but the fall of 2005 is where the story takes an alternate route.

His ride began in 1968. Unsworth hails from Potsdam, New York, an idyllic, cultural and educational hub of 45,000, just north of the Adirondack foothills. Before moving to Boone, North Carolina in the ‘80s, his father was Associate Dean of the Crane School of Music at SUNY, Potsdam and played jazz piano. His mother played piano, taught music theory and history there too. He’s the second of six children, four of them, musicians.

Osmosis is one way the Unsworth clan incorporated music into their souls. Classical and jazz, but mostly the latter, was always on the record player. He remembers, “Plain and simple, music was the household focus.” A foreshadowing of Unsworth’s intensity, “I don’t think my parents ever had to get on me to practice. I started with classical piano lessons when I was 5, and because of its beauty and unusual sound, I picked up the French horn and additional lessons in 4th grade.” While wrapped up in classical training, he also had jazz on his brain, and thinks that the early aural immersion resulted in his current affinity for the genre.

Unsworth joined the junior high jazz ensemble playing yet another instrument, the electric bass. “In my teens, I looked up to my bass-playing, older brother. I wanted to play in his rock and roll band. He wanted to sing and was happy to pass the instrument onto me. My foray into heavy metal lasted only a couple of months, but I continued playing the instrument in large and small jazz ensembles through college. It was a great way to learn jazz forms and tunes, to develop an ear for harmonies and loosen up enough to experiment with improvising.”

On the other extreme, Unsworth entered many nationally recognized horn competitions and in 1985, in 10th grade, he was a finalist in the young artist solo competition sponsored by General Motors and Seventeen Magazine. He was also a member of the National Youth Orchestra in high school and had the honor of playing one week in Los Angeles under the direction of the then Oregon Symphony Music Director and native Philadelphian, James DePreist.

Upon graduation, the straight ‘A’ captain of the varsity high school basketball team wanted a real college life and chose the academic road. The most important criterion was that the institution has a first-rate music school. “A conservatory atmosphere was not for me. Being a sports fanatic too, I chose Northwestern, a school with a basketball and football team. I played bass for the basketball band so I could get free admission to the events. The pitiful thing was that during my tenure, the Wildcats football team only won five games.”

At Northwestern, Unsworth studied with former Chicago Symphony Orchestra members Norman Schweikert and Gail Williams, who remains one of Unsworth’s most important personal and professional influences. “She’s like my second mom. Although I had potential as a horn player, I was seriously involved with weight lifting as a freshman and sophomore. I could bench-press three hundred pounds, but was muscle bound and my shallow breathing interfered with my success on the horn.” A self-described caricature from The Incredibles (big upper-body with chicken legs), Unsworth allowed Williams to convince him to get into better aerobic shape. He quit lifting and like ‘mom’, took up running. In typical style, the first race he entered was a full twenty-six mile marathon. This required months and months of preparation, and he finished with a respectable seven minute per mile average. “It hurt a lot, but was such a thrill to finish�"I got hooked.” The wind up was fifteen more marathons, horn playing to full potential and the current day, six foot tall, thin, proportionate Unsworth.

Unsworth went on to graduate school at the University of Wisconsin-Madison studying with Douglas Hill. This is where he eventually transferred jazz to horn. Under the tutelage of Les Thimmig he quickly learned to apply his jazz background to his primary instrument. His degree was in classical performance, but outside of his lessons, he composed on the side and took every class he could manage in the jazz department. “How I was able to get away with that, I’m not sure.” With graduation imminent, Unsworth began practicing 4-6 hours per day preparing for classical orchestral auditions. In 2000 he was named their Distinguished Alumnus of the Year.

All that groundwork landed Unsworth a spot in the New World Symphony, a training orchestra for highly gifted young artists preparing for a career as orchestral musicians. Unsworth auditioned and joined after receiving his master’s degree. He brought to the NWS extensive professional experience, having played with the Chicago Symphony and in many other professional situations. Because of his concert stage familiarity, he got restless and left after only four months, moving to Chicago to try and make a go of it as a freelancer. This turned out to be short-lived. Three months later, he won a job in the horn section of the Detroit Symphony.

Even though he held the prestigious position in Detroit for three years, playing was secondary to his running obsession. This kept him rustier than he wanted to be when a Philadelphia horn slot opened in January of 1998. He practiced intensely for three weeks. With the approval of the Orchestra committee, Wolfgang Sawallisch hired Unsworth in March of ’98. A year later he also joined Temple University faculty and is currently Instructor of Horn and Coordinator of Brass Repertoire. At Temple, he has performed numerous solo recitals as well as recitals and master classes at other universities throughout the United States. Unsworth has also performed repeated solo and chamber concerts at Carnegie’s Weill Recital Hall.

In 2000, Orchestra members, including Unsworth, participated in the filming of the new documentary Music From the Inside Out, produced and directed by Emmy-winner and recent Oscar-nominee, Daniel Anker. During this time and while his wife was pregnant with their first child, Unsworth had big plans to break his now 2.37 personal marathon record. The day of the race, the temperature was 30°, with an 18°-wind chill factor. “At mile 16 of the 26.2 miles my legs were freezing. I couldn’t even feel them. I lost 7 to 8 minutes in the last 10 miles.” This ‘failure’ perhaps marked the beginning of a major refocusing on Unsworth’s part, not only on family and children, but back to his other love, jazz. (He did sneak in one more race, but alas, finished with a 2.48).

One might call his new resolution a breakthrough, however. Unsworth consciously abandoned his pre-adolescent aspirations to climb the classical ladder, deciding to forego the fall 2005 principal horn audition in favor of having more creative energy to put towards jazz. He is quite content with his current orchestral role and becoming comfortable with the notion that good enough is good enough. The time was ripe for him to now exercise the right side of his brain and satisfy his longing for writing and making jazz. By this juncture, Unsworth had accumulated many compositions. “I’d been tossing around the idea for years. I wanted to record a jazz CD, but there were confidence issues. I worried that my playing wasn’t together enough, that I couldn’t cut it with the ‘real’ jazzers.” His own vacillating was driving him crazy, but a lot of prodding from outsiders and the realization that he had amassed a significant amount of material over more than ten years has resulted in his groundbreaking debut-recording, excerpt this!

The instrumentation of horn, violin, bass clarinet, vibraphone, bass, and drums on excerpt this! creates a unique texture, one that combines classical chamber music elements with improvisation, and truly defines the term chamber jazz. In addition to the compositions for sextet, the CD includes unaccompanied jazz works for horn by Unsworth, Les Thimmig and a Temple commission by Dana Wilson, which set new boundaries for virtuosity on the instrument.

The release coincides with two Philadelphia performances. On Friday, March 17th, Unsworth takes the stage with his studio sextet at the Philadelphia Museum of Art and on the 19th at Temple University’s Rock Hall. The group heads down to the Southeast Horn Workshop in Natchitoches, LA on April 1st.

“The recording and production of this CD was one of the most liberating and thrilling undertakings of my career. This might be the most fun I’ve ever had while music making. I’m already thinking about the next one.” Show less 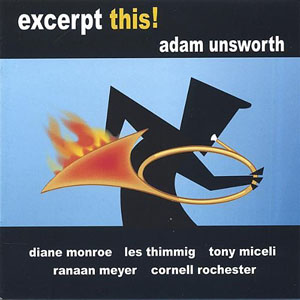 All About Jazz musician pages are maintained by musicians, publicists and trusted members like you. Interested? Tell us why you would like to improve the Adam Unsworth musician page.