By Walter Kolosky
November 19, 2002
Sign in to view read count 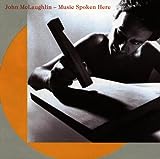 Finally available from Wounded Bird Records, 1982's Music Spoken Here features the same line-up as the previous year’s Belo Horizonte. MSH is a little rougher around the edges than the earlier effort. This may be seen as an improvement to some, as the music is a bit wilder. But to others, the compositions may seem a bit weaker. However, make no mistake about it: this is a fine album with much to offer.

"David" is the highlight of the album. For several years, McLaughlin played this piece on tour and demonstrated why the acoustic guitar, when played brilliantly, may be one of the most expressive instruments on the planet. (Also listen to the Trio's version on Passion, Grace and Fire. ) Another piece of note is "Negative Ions," a murky tune that toys with our inner demons. Mclaughlin obtains a truly strange tone and sound on this cut. He appears to be playing an electric for this piece, but the original liner notes do not confirm this.

Classical and jazz pianist Katia LaBeque lets loose with some furious written-out runs that, although well played, sound a little too rehearsed for a jazz album. Her sound however, does help to define this music, giving it a European flavor.

Music Spoken Here comes awfully close to New Age music in places, as did Belo Horizonte, but as with all McLaughlin's recordings, there is more than meets the ear. Just when you think the man is going soft, he unleashes a torrent of sound which ensures the tune will never make any New Age radio play list!

Tommy Campbell deserves a few words. His drumming on two records and two tours was outstanding. In the end, McLaughlin said that this music really couldn’t go on in the way he intended, because his desire to play acoustic on stage was overwhelmed by the volume of the drums. In order to be heard, he had to turn his volume way up, and this led to major feedback problems. Perhaps McLaughlin should have relied upon Tommy in an electric fusion band. For now, we will have to settle for two very good recordings.