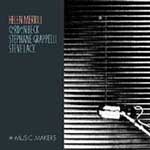 Jazz vocalist Helen Merrill doesn't record that often and when she does, it is often an unpredictable session. For her last major label work in 2000, Jelena Ana Milcactic A.K.A. Helen Merrill, recorded music based upon her Croatian heritage; it was quite a project but somehow eluded me. Music Makers is a reissue of a 1986 session, originally on Sunnyside, with two unusual trios. Merrill appears with long-time accompanist Gordon Beck on piano and electric piano, plus either master violinist Stephane Grappelli or the likewise celebrated soprano saxophonist Steve Lacy. For those of you who have not heard Lacy in a more mainstream appearance, he is a perfect accompayist for Merrill as well as a leading spokesman for the soprano sax on his solos.

Helen Merrill's specialty is the ballad form and one learns not to expect toe-tapping syncopation as a general rule of thumb. Some have criticized her delivery as minimalist and lacking in emotion, but I must differ: Merrill's presentation projects warmth and expression. Her landmark sessions on EmArcy with Clifford Brown, perhaps, gave her a step up that would have been difficult to match ordinarily, but a look at the body of her work reveals any number of instances of excellence.

Predictably, there are five ballads—"Round About Midnight," "Sometimes I Feel Like A Motherless Child," "Laura," "As Time Goes By," and "Solitude"—taken at full-tilt introspective pacing. "A Tout Choisir," with French lyrics, also falls within this category. A slight bounce tempo is provided for Benny Carter's "When Lights Are Low" and Merrill sings vocalese to Beck's "And Still She is With Me." The title tune, written by Torrey Zito with lyrics by Merrill, represents a departure from the rest: a rare moment of edginess realized through a Lacy solo and her vocal.

I have to admit being a Merrill junkie since I picked up a second hand copy of her 1959 Metrojazz album You've Got A Date With The Blues in the early '60s. When I heard her perform "Just Squeeze Me" in French, I was hooked. Having counted some 41 titles that she's recorded, there have been only a few disappointments. In addition to the star power of the presence of Grappelli and Lacy, Beck strikes me as a sensitive accompanist (while the addition of electric piano, an instrument du jour amongst musicians in the '80s, on two tracks is unnecessary). Fans won't be disappointed.

Round About Midnight; Sometimes I Feel Like A Motherless Child; A tout choisir; When Lights are Low; And Still She Is With Me; Music Makers; Laura; As Time Goes By; A Girl in Calico; Solitude; Lady Be Good; Nuages.